Man fatally shot while parking car for partner outside home 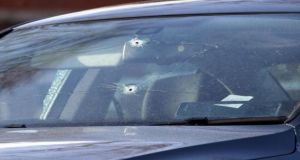 A file image shows bullet holes in the windscreen of the vehicle Paul Kavanagh was driving when fatally shot on Church Avenue in Drumcondra, Dublin 9 on March 26th, 2015. Photograph: Collins.

A man who was fatally shot on a residential road in Dublin three years ago had left the house after being asked by his partner to park a car for her, an inquest has heard.

Paul Kavanagh (26) was wounded a number of times while looking for a parking space near his home on Church Avenue, Drumcondra on March 26th, 2015.

His partner Gemma Roe told Dublin Coroner’s Court that she had arrived back from the gym at about 11.30am and beeped the horn to get Mr Kavanagh came out to help her.

“Parking was tight and I wouldn’t be the best driver so Paul often parked the car for me,” she said.

Ms Roe said she was concerned that he had not returned within 10 minutes. “I had a feeling when I heard the ambulance and he’d been gone so long.”

Jarlath Moran told the inquest that he saw Mr Kavanagh sit into the Volkswagen Passat and drive up the road before stopping and reversing at speed.

“It was flying in reverse,” he said.

Mr Kavanagh was reversing to escape his attackers but was forced to stop by a white Audi that pulled out and blocked the road, the court heard.

Joseph Long, who lives locally, said he heard a number of loud bangs and then saw a collision.

“I saw one man running from the car with a gun held up in the air. Then I saw a second. They were both wearing ski-masks. They jogged off in the direction of Grace Park Road,” he said.

Paramedics arrived at the scene and found that Mr Kavanagh had suffered a gunshot wound to the eye and two to the chest. He died at the scene.

A postmortem gave the cause of death as multiple gunshot wounds.

Gardaí found a Glock 17 firearm with an extended magazine on the ground near the scene and the Audi was set alight before the gunmen fled. A murder inquiry into his killing is ongoing but no arrests have been made, the court heard.

The jury returned a verdict of unlawful killing by a person or person’s unknown.

“I know your family has been touched my a lot of tragedy, my deepest condolences on your loss,” Coroner Dr Myra Cullinane said.