Inquest told that caller phoned ambulance for ‘just another junkie’ 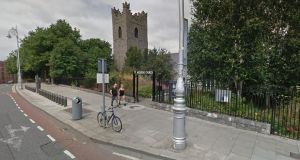 A caller phoning for an ambulance described the injured party as ‘just another junkie’ an inquest heard.

Garda Seán Byrne of Kevin Street Garda Station said the caller who phoned for an ambulance and told the operative it was for “just another junkie”. The call was made from a sim free mobile phone and the caller has not been identified, Dublin Coroner’s Court heard.

The area is a public park owned by Dublin City Council which was locked when emergency services arrived at the scene. The area is one of high volume drug use, Garda Byrne told the court.

“There was evidence to suggest Mr Keys had recently injected himself,” Garda Byrne said.

The man was unresponsive when emergency services arrived and he was pronounced dead at the scene by Dr Muhammed Wasif Ghaffer.

The man’s mother became concerned for his welfare when he had not signed in at his local garda station for four days and she contacted gardaí.

The cause of death was mixed drug toxicity, according to an autopsy performed by pathologist Dr Muna Sabah. A toxicology report found he had xanax, valium, heroin and a metabolite of cocaine in his system.

The jury at the inquest returned a verdict of death by misadventure.