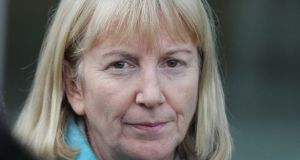 Dr Bernadette Scully said of her daughter Emily Barut: “She was the little baby I always wanted and she was just so beautiful.” File photograph: Collins Courts

A jury in an inquest into the death of a severely disabled 11-year-old girl who had been given a powerful sedative during an epileptic seizure decided that she died from natural causes.

The verdict in Tullamore came more than two years after a local GP, Dr Bernadette Scully (60), was found not guilty of the unlawful killing of her only daughter Emily Barut.

The inquest had been told toxic and potentially fatal levels of chloral hydrate had been found in the girl’s system during a post mortem.

The child was pronounced dead at Tullamore Hospital on September 15, 2012 after being taken by ambulance from her home at Emvale, Bachelor’s Walk, Tullamore.

In a statement read at the Offaly Coroner’s Court on Monday Dr Scully said her only child Emily, who had microcephaly and severe epilepsy, had been unsettled for a number of nights prior to Friday, September 14, 2012.

After being put to bed at 9pm that night she began whimpering and her mother was up with her at 2am and 6am to give her prescribed medication.

After 11am during a seizure she was “really crying loudly” and was in “relentless pain”, Dr Scully said, and she started to go stiff in an unusual way.

The seizure was different from normal ones and she was drooling, and in a panic Dr Scully went to the kitchen and gave her 10 mls of chloral hydrate in an attempt to comfort her.

There was no reduction after one dose and that “really panicked” Dr Scully. Because her daughter was “jerking” on the bed she gave her about 5 ml more.

“I took her in my arms and I just held her. It was so quiet I felt I knew she wasn’t breathing,” said Dr Scully.

She remembered saying “please don’t go Emily” and added: “She was part of me always. We were together, did everything together. She was the little baby I always wanted and she was just so beautiful.”

Replying to the coroner Raymond Mahon, Dr Scully said she had given the sedative in an attempt to stop the fit and it was unusual for the first dose not to settle her daughter.

Dr Scully’s partner, Andrius Koslovskis, said he had slept in a separate room the night before Emily died and when he spoke to the child’s mother on the Saturday morning she was exhausted.

He returned home after 2.30pm that day and went to collect some medicines from a local pharmacy and then got food from a take-away for himself and Dr Scully.

Dr Scully said she would like to lie down for a while because Emily was sleeping and Mr Koslovskis said he could not hear any noise from the monitor in the girl’s room.

At about 9pm he went to Emily’s room and found white foam and saliva on her and noticed she was cold.

He called out to Dr Scully and shook her but could not wake her up so he called an ambulance.

The inquest heard that paramedics found Dr Scully unconscious, but breathing, but they could not resuscitate Emily.

In her evidence, state pathologist Dr Marie Cassidy said Emily Barut had been disabled from birth and had severe physical and mental disabilities.

Dr Cassidy said the girl appeared to have been extremely well cared for and was developing normally despite her disability.

Nonetheless she was at risk of a potentially fatal seizure at any time and there was ongoing damage to her brain due to repeated seizures.

The post mortem showed that chloral hydrate was present at a level within which fatalities could occur and while there was no evidence of asphyxia, the girl could have suffocated in bed if she had been in a face down position.

She described the level of chloral hydrate as “high” and “potentially fatal” and her death could be attributed to intoxication from the sedative.

While the level would be sufficient alone to cause death, death was also due to the interaction of the girl’s chronic condition, her microcephaly, her ongoing epilepsy and acute inflammation of her lungs.

Dr Cassidy agreed with counsel for Dr Scully, Gerard Groarke, that Emily could have built up a tolerance to chloral hydrate and while the level was toxic, death wasn’t just simply due to the sedative.

Mr Mahon told the jury they had three options for verdicts, death by misadventure if they were of the opinion the sedative alone had caused the death, death by natural causes if they believed the seizure alone had been fatal, or an open verdict, if they thought it was caused by both chloral hydrate and her existing conditions.

“Dr Scully was clear that the purpose of giving the chloral hydrate was to ease her symptoms,” said the coroner.

After a short deliberation the jury said their verdict was that Emily Barut had died from natural causes due to her extreme medical condition.

In December 2016 a jury at the Central Criminal Court found Dr Bernadette Scully (60) not guilty of the manslaughter of Emily Barut.

At the trial the GP denied an allegation that she was guilty of an act of gross negligence involving the administration of an excessive quantity of chloral hydrate which killed her daughter.

3 Woman (30) and man shot and seriously injured in Dublin