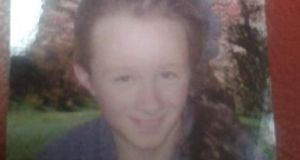 Family photograph of Nikita Dunne on her Confirmation Day

A 15-year-old girl who died after she stepped out in front of a truck was on her mobile phone at the time, an inquest heard.

Nikita Dunne of Sherrard Street, Dublin 1 died after she was struck by a truck outside Heuston Station on July 17th, 2014.

Ms Dunne was raised by extended family having lost both her parents at a young age. Her grand-uncle Joe Flood said the family bear no ill will against the truck driver and keep him in their prayers.

Dublin Coroner’s Court heard Ms Dunne was seen walking from the Parkgate Street direction about 4.20pm in the afternoon.

Truck driver Patrick Bagnall had made a delivery to Heuston Station and stopped at a red light before easing slowly forward in the direction of Heuston Bridge. He saw the girl as he waited for the lights to change.

“The last I saw of her she was on the footpath. I checked the mirrors and moved off. I felt a bump and saw a body on the ground,” Mr Bagnall said.

Witness Andrea Gozzola saw the girl cross in front of the truck, which was moving at “walking speed”.

Her head was below the truck’s cab level, making it impossible for the driver to see her, he said.

“When she was half across she turned her head back and realised, she was too close to get away. It all happened so slowly but yet so quickly,” Mr Gozzola said.

Witness Andrea Ryan was cycling along South Quay and saw Ms Dunne fall under the wheels. “It was as if she was just pushed over by the truck,” she said.

Sergeant Paul Kearney said CCTV footage showed the girl was holding a mobile phone when she stepped out in front of the truck.

“It appears she was holding something to her head. She may have been dialing a number when she was seen looking at her phone (seconds) earlier. She may have noticed the truck more if her arm was down,” Sgt Kearney said.

The girl was pronounced dead at the scene.

A postmortem examination carried out by State Pathologist Prof Marie Cassidy found that she died of crush injuries to the trunk due to a road traffic accident. Blood tests revealed the teen had no alcohol or drugs in her system.

The jury returned a verdict of accidental death and recommended that the “dangers of the distractions of using mobile phones should be drawn to the attention of the public and the National Roads Authority”.