Woman tripped over wall into water and drowned, inquest hears 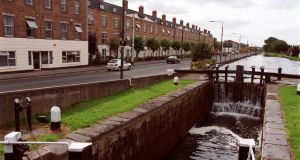 A coroner has queried the safety of a low wall along Dublin’s Grand Canal following the drowning of a 55-year-old woman.

The wall, which the inquest heard is about 1m high, runs along the banks of the canal for 3km through the south inner city.

Mary Cunningham, a mother of one son, tripped and fell into the canal as she was walking along Grove Road towards Portobello Bridge on May 31st, 2014.

Dublin Coroner’s Court heard how Ms Cunningham had been drinking at home with her sister and later decided to visit a casino on Camden Street.

“When she had a few drinks she loved to go for a flutter at the casino,” her sister Susan Cunningham said. “Sometimes she would walk to save the bus fare. I was always telling her not to be walking too close to the canal. I used to worry about her. I used to say Mary, stay on the far side away from the canal. She had a habit of tripping and falling.”

On the night of her death, Ms Cunningham left home near Harold’s Cross at about 12.30am to make her way into the city via Grove Road, Dublin 6 . CCTV footage recorded her walking along Grove Road at 12.40am. She never reached the casino.

In her postmortem report, State Pathologist Dr Marie Cassidy found a small bruise to the back of Ms Cunningham’s head. The cause of death was drowning. She had a blood alcohol level of 280mg per cent. Ms Cunningham could not swim, the inquest heard.

Coroner Dr Brian Farrell returned a verdict of death by misadventure, an accident with additional risk factors including the alcohol and the low wall barrier.

Susan Cunningham said the wall runs for about 2km at that height and a lot of people had accidentally fallen in.

“It’s very, very low, if your shoelace was open and you tripped (you could easily fall in),” she said.

Dr Farrell said he would write to Waterways Ireland for the matter of the height of the wall to be evaluated in the public interest.