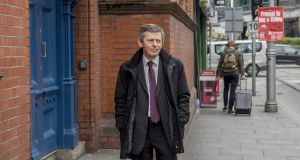 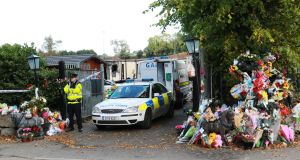 Floral tributes left at the site of the fire that claimed 10 lives in Carrickmines. Photograph: Nick Bradshaw

All 10 victims of a fire at a halting site in Carrickmines in south Dublin died of carbon monoxide poisoning, an inquest has heard. The inquest into the deaths following a fire at Glenamuck halting site heard the Garda investigation into the fire is ongoing.

Five adults and five children died after the fire broke out in the early hours of October 10th, 2015.

The other victims were Willie Lynch (25), his partner 27-year-old Tara Gilbert, who was pregnant, and their daughters Jodie (9), and Kelsey (4); and 39-year-old Jimmy Lynch, a brother of Willie.

The victims were residents of Glenamuck halting site in Carrickmines.

Garda Charlie Dempsey took the stand at Dublin Coroner’s Court to confirm the details of the identification process for each victim.

The five adults and four of the children were identified using DNA evidence with the assistance of Dr Alan Magee, the court heard. The additional services of forensic dentist Dr Mary Clarke were used in the identification of some of the younger related siblings.

Mary Connors was formally identified by her relative, Dan Connors, at the emergency department at Tallaght Hospital.

The cause of death returned for all 10 people was acute carbon monoxide poisoning due to smoke inhalation.

Four relatives of the victims were present in court as the coroner, Dr Myra Cullinane, outlined the scope of the inquest. She told family members that the inquiry into the deaths will be treated as one inquest as the circumstances of all 10 deaths are the same.

“We will not hold a number of inquests in this case because the circumstances are tragically the same. Today we are opening what is called a joinder inquest in relation to all of the people who died in this fire,” Dr Cullinane said.

Gardaí at Dún Laoghaire Garda station applied for a six-month adjournment of the inquest to allow for ongoing investigations. Dr Cullinane adjourned the inquest until September 21st for further mention.

The coroner extended her sympathies to all those bereaved by the tragedy. “Clearly the evidence in court testifies to the scale of the loss of life suffered by the families and the community. It must be very difficult to bear,” the coroner said.