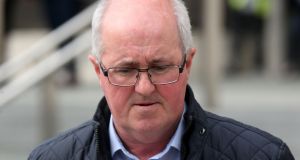 A “respected and trusted” Dublin assistant bank manager who stole more than €127,000 from customers who were also his friends will be sentenced in July.

Owen Travers (61) with an address at Glen Easton Square, Leixlip, Co Kildare, pleaded guilty to 15 counts of theft from seven customers over a number of years.

He appeared before the Dublin Circuit Criminal Court on Tuesday where he said he wanted to convey his “deepest apologies” to all those affected by his actions.

“The shame I’ve brought on myself and my family is unbearable and something I will have to live with for the rest of my life,” he said in a statement read out in court.

All of the victims were customers with whom he had a personal relationship and some of them had lent money to him in the past, prosecution barrister Pieter Le Vert said.

The court heard Travers’s actions came to light in February 2012 after one of his victims noticed a significant amount of money missing from her elderly mother’s account. Nearly €25,000 had been taken in unauthorised transactions between July 2010 and January 2012.

The woman then noticed that €10,000 was missing from her own company’s account. She tried to contact Travers a number of times before taking the matter up with the bank.

Travers later told gardaí­ he had gambling issues and a number of debts, including two struggling investment properties in Dublin and Portugal.

Defence barrister Ronan Kennedy said Travers has no previous convictions and had a bank order in court to pay back the remainder of the money he had taken. Judge Sinéad Ní Chulachain adjourned the matter for sentencing on July 11th.