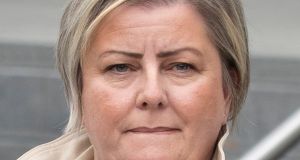 Lynn Margiotta, from Finglas, Dublin, said she was unfit for work for much of 2014 and provided over a dozen medical certificates made out by her brother, Dr Tony Margiotta. Photograph: Collins Courts

The trial of a garda civil servant accused of using bogus sick certs has collapsed after a judge ruled the investigation breached her right to privacy.

Lynn Margiotta (50) was arrested at her home in Navan in August 2014, a month after she made a complaint of bullying against her line manager, Garda Sergeant Sharon Burke.

Ms Lynn said she was unfit for work for much of 2014 as a result of stress due to the death of her mother in January that year. During that period she provided over a dozen medical certificates made out by her brother, Dr Tony Margiotta (58).

During legal argument made in the absence of a jury the investigating officer, Garda Superintendent Desmond McTiernan, told Dublin Circuit Criminal Court that he believed Ms Margiotta when she said she was sick.

He said he was investigating whether the certificates were used to obtain sick leave by deception and said whether she was sick or not was irrelevant.

Ms Margiotta of Finglas, Dublin faced 18 counts of using a false instrument at Mountjoy Street and Store Street garda stations on dates between January 22 and July 31 2014.

Her brother, with an address in Hollystown, Dublin was charged with 18 related counts of making false instruments. Both accused denied the allegations.

The prosecution had alleged that the certificates falsely purported to be from Dr Teresa O’Brien and Dr Barry Brown.

A jury was sworn in to hear the case last week but defence applications against the admissibility of the evidence resulted in a week of legal argument in the absence of the jury.

Cathal McGreal BL, defending Ms Margiotta, submitted to Judge Patricia Ryan that the seizure of the medical certificates was unlawful and breached her right to privacy. He said that his client and the investigating gardaí all worked in Store Street garda station and the certificates were taken from the station as part of the investigation into alleged fraud.

The certificates were filled out by Dr Margiotta but were officially stamped in the name of Dr O’Brien or Dr Brown. Sgt Burke said she became aware Dr O’Brien was no longer resident here and reported this to a superior officer.

After the criminal investigation had been initiated gardaí received an expert report from Colin Bradley, professor of General Practice at UCC, which stated it was not unusual for locums to use another doctor’s stamp while filling out sick certs and that the practice was unregulated.

In her ruling Judge Patricia Ryan said the sick certificates included details of her ailment. She said investigators should have sought consent from Ms Margiotta to hand the records over and if this was not provided they ought to have sought a warrant to obtain the records.

She said the seizure was improper and breached her privacy and the records were therefore inadmissible.

She further ruled that the defendant was denied access to a solicitor during her detainment at Navan garda station following her arrest.

As a result she ruled that the content of the interviews were inadmissible. Eilis Brennan SC, prosecuting, told the court that as a consequence of the two rulings of inadmissibility the DPP was entering a nolle prosequi in all charges against both defendants.

On Tuesday Judge Ryan thanked the jurors before discharging them from jury duty.

The court heard that Ms Margiotta filed High Court proceedings against the Garda Commissioner in 2017.