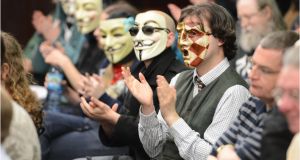 Attendees at a conference in 2012 entitled ‘Dublin Offlines; Speaking out against the cult of Scientology’. Photograph: Dara Mac Dónaill/The Irish Times

Zabina Collins, a leading member of the Church of Scientology in Ireland, launched “a vicious character attack” on a former member who had given a talk to Dublin schoolboys on cults, the Circuit Civil Court has been told.

Séamas Ó Tuathail SC, told the court Peter Griffiths, of Cual Gara, Teeling Street, Ballina, Co Mayo, had been defamed by Ms Collins in an email she had sent to the headmaster of St David’s CBS, in Artane, Dublin, following a posting on the internet by Mr Griffiths of what he had said to the boys.

Mr Ó Tuathail, who appeared with barrister John Smith for Griffiths, said the email had nothing to do with the issues of scientology. She had written to the school principal allegedly as a concerned parent who had no child attending the school.

Ms Collins (36) a Dublin chiropractic clinic director, of The Boulevard, Mount Eustace, Tyrelstown, Dublin 15, is being sued by Mr Griffiths for damages for defamation.

In her email, Ms Collins alleged that Mr Griffiths’ talk had centred on the scientology religion which counts Tom Cruise and John Travolta as members and that he had been extremely abusive and insulting to Scientologists.

She had accused him of “openly and viciously” slandering the church and accusing members of responsibility for three deaths and bribing a coronor in the US. She accused him of being “an avid hate campaigner against scientologists” and “hate mongering” against the church.

Ms Collins had told the school principal Mr Griffiths was a leading figure in the Anonymous hacking group in Ireland whose trade mark was a Guy Fawkes mask . She had sent the headmaster a picture that Mr Griffiths initially posted on the internet in which he is naked and holding a mask over his genitals.

Mr Griffiths told the court Ms Collins had included in her e-mail links to videos, from his publically accessible Vimeo account which were viewed by the court.

The court heard the videos had been uploaded under Mr Griffiths’ own name and Ms Collins was concerned that the schoolboys he had talked to in Artane may have been able to find them if they looked up his name on the internet.

Mr Griffiths denied having been under Garda surveillance as he protested when Tom Cruise had visited Dublin in April 2013. He had claimed in an interview at the time that gardaí had just been “doing their job by not letting Cruise see anti-Church of Scientology protesters.”

He denied being a member of Anonymous, members of which, the court heard, have been reported in the media as being responsible for the hacking of the Sinn Féin website as well as Fox, Sony, the FBI, Scotland Yard and Garda headquarters.

Ms Collins told the court she had been born in Derry and brought up a Catholic and had been told that “Protestants might not be the best people to associate with”. She believed that because of this sort of teaching some boys in her school had gone on to join the IRA.

She had lived as a Catholic in Belfast and had found it very hard growing up in the troubles in the North. She had gone to Australia in 2000 and had become a member of the Church of Scientology in which she had learned it was possible for people to live in harmony.

Ms Collins believed Mr Griffiths, “obviously a disgruntled member of scientology,” was a member of the Anonymous group and had seen him with and without masks at protests against scientology. He had harassed and intimidated her, she claimed.

She was shocked St David’s school would allow him talk to its boys in inappropriate language and make disturbing allegations against scientologists and have the children learn to hate scientology.

Ms Collins said that while on occasions she had reported Mr Griffiths to the Garda for his behaviour towards her and scientology, he had never been prosecuted or convicted of a criminal offence.

The court adjourned until January when it will give its decision on the defamation case.