Election fever simmers as politicians begin stockpiling ammunition – against each other 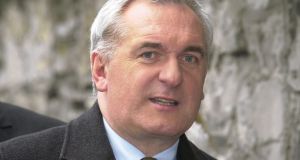 The important task of stockpiling ammunition ahead of the general election is underway in earnest in the main parties.

Goggle-eyed junior assistants have been trawling through the social media back catalogues of political rivals in search of festering gobbets of indiscretion posted in times past. Freedom of Information queries are flying into government departments in the quest for that killer statistic or embarrassing example of ministerial hubris.

Fianna Fáil had a brainwave recently and lashed in FoI requests to every Government department asking how much is spent on make-up for the Ministers. The replies were most disappointing – not a cent. The party also slapped in a question about haircare costs, although this would not be an issue in a number of departments.

It was a brave thing for the Soldiers of Destiny to do, given the party’s recent history with expensive make-up bills. Either that or whoever thought of sending in the FoI requests has a short memory.

During the long reign of Bertie Ahern, it emerged the State was forking out almost €500 a week on paint and powder for Bertie. His department had two make-up artists on the go, earning the Siptu rate.

Bertie’s colossal cosmetics bill was brought up in the Dáil on a few occasions. In 2006, John Gormley of the Greens wondered how Bertie could expect the taxpayer, “many of whom are lying on trolleys”, to pay such an exorbitant sum for his vanity.

“Isn’t it extraordinary that you spend more money on make-up than any of the ladies in the Cabinet. What sort of priorities do you have when you’re heading around like the Queen of Drumcondra?”

He said Bertie should be called the L’Oreal taoiseach “because you’re worth it”.

The idea of a taoiseach spending so much on cosmetics when the country was going down the tubes did not sit well with the public. His successors, Brian Cowen and Enda Kenny, discontinued the practice and didn’t claim any expenses for make-up.

By getting a negative response, Fianna Fáil might have dodged the bullet it was hoping to save for Fine Gael. It spared Fianna Fáil blushes (or blushers) by not rekindling memories of their former leader’s pamper regime.

There was a circling of wagons in Fine Gael on Thursday evening following reports of a heated argument in Leinster House between the Minister for Health and a couple of Government backbenchers over the crisis in hospital emergency departments.

Apparently tempers flared following remarks made by Kate O’Connell at a meeting of the Oireachtas Health Committee. The TD for Dublin Bay South said she was so embarrassed by “unacceptable” conditions in Crumlin children’s hospital when she attended with her sick child that she feared somebody would recognise her as a politician. After waiting for eight hours she eventually decided to “give up” and leave as her child was the “least sick” there.

This is where things get complicated. O’Connell, along with Kildare North TD Bernard Durkan, was seen at lunchtime in the corridor near the members’ bar involved in what an observer describes as “a very animated” exchange of words with Simon Harris, Minister for Health. The three then moved into the private bar, which is open only to Oireachtas members.

Party sources are playing down the encounter. Depending on who you talk to, they were just having “a chat and a coffee”; Harris was being “very frosty” with O’Connell for going offside at the committee; the three had an exchange which was “full of passion”; O’Connell and Durkan were “lambasting” the Minister for not doing enough, and “1,000 per cent nothing happened at all”.

A non-Fine Gaeler who was there told us “they were having a right go at each other. I moved away”.

Pre-election jitters are taking hold in Leinster House. Thursday’s little episode, and deputy O’Connell’s comments about Crumlin hospital would indicate that the Government is getting a rough time on the doorsteps about the state of the health service.

While ’tis not yet the season to be jolly and to hand out end-of-term awards, we feel a special exception must be made in the case of Dara Murphy, Dáil Éireann’s invisible man.

Two Jobs Murphy announced he is stepping down as a TD in the next couple of weeks to take up a permanent job in the European Commission. The Cork North-Central TD has been conspicuous by his absence from Leinster House for much of the past two years due to his Brussels-based job as director of elections for the European People’s Party (EEP), Fine Gael’s affiliate group in the European Parliament.

On Thursday, the Taoiseach said he sees nothing wrong with this, particularly as Murphy “has been present for key votes”. And that’s all that matters.

“But his main job has been a European job in the past two years and he’s done that extremely well.”

His main job? Promoting the EPP and, by extension, Fine Gael, is not going about his nation’s business. It’s a private gig. Murphy may as well have been running a B&B in Bavaria or playing flugelhorn with the Vienna Philharmonic.

His main job? Meaning his job as a Teachta Dála was a sideline?

Anyway, before he goes, we want to give him the Sesame Street Prize for successfully counting all the way from one to 120.

Dara is a whizz at the adding up. Last year, despite attending the Dáil for just 42 out of the 104 sitting days, the Cork North-Central deputy managed to make it into Leinster House and electronically register his presence on 78 non-sitting days, thus reaching the holy grail of 120 days required to collect travel and accommodation allowances.

Never too busy in the big job in Europe to lose count of his important “Anseo!” days in Kildare Street.

Of course the elevation of Two Jobs Murphy to a permanent position with the European Commission is just one of many career moves happening in Brussels these days.

The changing of the guard in the commission and council in Brussels always sees a swathe of promotions and sidestepping in the services and the commission cabinets. Of particular interest to the Irish ranks this week were the appointments of Clare man Anthony Whelan from the telecoms directorate to the cabinet of commission president Ursula von der Leyen to advise on digital issues, one of her key priorities.

Peter Power from Limerick, Phil Hogan’s chef de cabinet, moves with his boss to the same role in trade with several other members of the Hogan agriculture cabinet.

And Dan Ferrie, who has worked tirelessly in the background as spokesman for the Barnier Brexit taskforce, gets a promotion to the front rank of the Spokesman Service. He will speak for the commission on finance and tax issues while maintaining a role on Brexit.

Dan might find it slightly more difficult reconciling his Irish sympathies in the new job where he will be advocating, among other things, for corporate taxation.

The tractor blockade around Kildare Street and Merrion Street on Wednesday had an unfortunate knock-on effect in Leinster House. The actions of the protesting beef farmers banjaxed the lunchtime offering of striploin steak in the Oireachtas restaurant and members’ bar.

The beef delivery didn’t make it past the farmers and the TDs went without their steaks.

Meanwhile, Noel Rock, Fine Gael TD for Dublin North-West, was also a victim of the blockade.

Rock ordered a tractor-load of leaflets from the Kildare House basement print room (not sure if they were to be printed by the Dáil’s mega-expensive new inky leviathan which was too big to fit through the doors when it arrived) but he was disappointed when he went to collect them.

There was no printing done because there was no paper. It didn’t get through the barricades either.

Rock had been hoping to capitalise on the launch this Saturday of a new 24-hour bus service in his constituency. Now he’s missed the bus and his leaflets won’t be ready on time.

Solidarity TD Mick Barry was highly annoyed when the Taoiseach accused him on Wednesday of being “at best ambivalent” about his support for democracy.

Leo Varadkar said Barry and his party “have been very supportive of far-left regimes in Venezuela and Cuba and other places that are not democratic”.

The TD for Cork North-Central angrily demanded that the Taoiseach withdraw the comment. He responded with a shrugging: “Condemn Cuba and Venezuela and I will.”

As Leo and his colleagues taunted People Before Profit and Solidarity TDs about democracy, Ruth Coppinger shouted “Sure your party were Blueshirts in the 1930s. Jeeesus! The cheek of you”.

“A fascist solution. That’s the basis of your party. And you’re lecturing us?” retorted Ruth.

“I am not talking about Lenin or Bolsheviks or gulags or Stalin or anyone or anything else you admire. I am talking about our time,” needled Leo.

As noise levels soared, the Fianna Fáil leader, smiling broadly, tried to intervene. He got his chance later on.

“I was trying to be helpful earlier,” said Micheál Martin.

“I would refer the Taoiseach to a wonderful pub in Enniscorthy where there’s an iconic photograph of Eoin O’Duffy leading the Blueshirts in military parade. It’s a wonderful reminder of Fine Gael’s illustrious past.”