Michael Lowry ‘cooked the books not once but twice’, court told 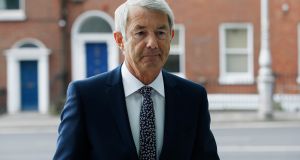 The State prosecutor in the trial of Independent TD Michael Lowry for tax evasion has said it was a case of the accused and his company “cooking the books, not just once but twice”.

“It was the accountant’s version of re-fried beans. The books are cooked in 2002, a sum of money is kept off the books and in 2007, the 2006 books are cooked again to bring the money in without drawing attention to it,” Remy Farrell SC, told the jury in his opening address.

Mr Farrell told the jury that it is the State’s case that a sum of Stg £248,624 received by Mr Lowry’s company and not declared to Revenue, “would have amounted to 88 per cent of the company’s certified gross profits for the year”.

Mr Lowry (61) of Glenreigh, Holycross, Co. Tipperary pleaded not guilty at Dublin Circuit Criminal Court to four charges of filing incorrect tax returns on dates between August 2002 and August 2007 in relation to a sum of Stg £248,624 received by his company, Garuda Ltd and one charge in relation to failing to keep a proper set of accounts on dates between August 28th 2002 and August 3rd, 2007.

He further pleaded not guilty on behalf of Garuda Ltd to three similar charges in relation to the company’s tax affairs and one charge of failing to keep a proper set of accounts on the same dates.

Mr Farrell told the jury that Mr Lowry owned a company called Garuda Ltd, which traded as Streamline Enterprises. He said the company was involved with commercial refrigeration and supplied such shops as Dunnes Stores.

Counsel said it was State’s case that Garuda Ltd., had a commercial relationship with a Finnish Company, Norpe Oy, which was involved in the same business. Garuda Ltd not only bought stock from this company but also “acted as sales agent” for it in Ireland and received commission for this work.

“There is nothing unusual or sinister about this. It is a perfectly normal commercial transaction,” Mr Farrell told the jury.

“This payment is not made to Garuda, nor is it made directly to Mr Lowry but rather it is made to a third party,” Mr Farrell said before he added that the identity of this third party, or the fact that he resided in the Isle of Man, was not of “huge relevance”.

He told the jury that it is the State’s case that this transaction was “done at the behest of Mr Lowry”.

Counsel said important consequences flow from this. The money was not accounted for anywhere in Garuda’s books, it was not reflected as an income and no tax was paid on it, yet “Mr Lowry had the benefit and use of that money”.

“He appropriated the money. He directed it to be paid to someone in the Isle of Man for his own purpose. The State say that amounts to income or profit,” Mr Farrell continued.

He told the jury it was “not reflected anywhere” in the 2002 accounts. “It effectively just vanishes into thin air. It is airbrushed out,” counsel said.

Mr Farrell said that Garuda declared a loss for 2002 and as such had “a nil tax liability”. He said the sum that was “effectively kept off the books would have amounted to 88 per cent of the certified gross profits for the year”.

He said in 2007, “a very strange thing happens” and the accountants working on Garuda’s books were told to account for the sum of Stg £248,624.

“A letter from Mr Lowry tells them the money was earned at some point during the course of 2006 and he tells them ‘you better account for it’”, Mr Farrell said.

“He tried to push the 2002 toothpaste back into the tube,” counsel said before he added that there was a “slightly more favourable tax rate” in 2006.

He said Revenue conducted an investigation in 2013 and discovered two invoices bearing the same number. He told the jury one of these invoices was purporting to show that the sum of Stg £248,624 was earned in 2006.

“The State say that this is a dummy invoice, created to give credence to a paper trail.” He told the jury this was the accountant’s version of re-fried beans.

Counsel told the jury that Revenue raised an assessment and indicated that the sum involved was a wage or income earned by Mr Lowry, however the accused appealed this decision and was successful.

He told the jury that it will need to decide what this sum represented. “If it was not a salary, was it a profit or a gain, this is something you need to consider.”

Earlier Mr Farrell advised the jury that there are many important accounting concepts including the fact that it is supposed to deal with transactions, “reflect things that happened in the real world” and that these transactions must be accounted for when they occur.

He also advised the panel that under company law, a limited company has certain responsibilities, which include an obligation to keep proper books of account.

On Monday afternoon, the former chief executive of a Finnish refrigeration company has told a jury that his company had “an agency agreement” to pay commission to Mr Lowry’s company for Irish sales.

Giving evidence from Finland via video-link, Fred Ramberg agreed with Remy Farrell SC, prosecuting that if his company, Norpe Oy, supplied to a retail outlet in Ireland, a commission would be paid to Streamline, the trading name for Mr Lowry’s company Garuda Ltd.

The witness agreed with counsel that an agency agreement, signed by both he and Mr Lowry on November 1st, 1997, outlined in the “terms of agreement” that the agent should be entitled to a commission of 5 per cent on all sales.

Mr Ramberg agreed that it stated that the agreement was between Norpe OY and Michael Lowry but that Mr Lowry’s name was crossed out and handwritten in its place was Glebe Trust, with an address in the Isle of Man.

He agreed that he had written in the change and had initialled it but was not able to indicate when he did this, “I’m not sure. I guess 2008” before he confirmed that he had “no clue” who Glebe Trust are.

The trial continues before Judge Martin Nolan and jury of eight men and four women.

Ahead of the jury being sworn in, Judge Quinn told the jury panel Mr Lowry was a TD, representing Co Tipperary and that the trial was in relation to “tax type offences”.

“If any of you have any strong views in relation to Mr Lowry, politicians, political parties or the tax regime, or if you have any other concerns in relation to this case or type of cases, which would mean you are not in a position to adjudicate impartially, you should bring that to my attention,” the judge said.

The trial is expected to last for two weeks.