Man who used two identities to collect €280,000 in welfare jailed 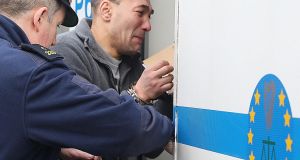 Adrian Vaduva leaving court after being sentenced to three years for defrauding the State over €280,000. Photograph: Patrick Browne

A man who used two identities to accumulate over €280,000 in social welfare payments between 1999 and 2015 would not have been caught without the introduction of facial recognition software, a court was told.

He was Tuesday given a three-year prison sentence, with the last nine months suspended, backdated to when he was arrested and taken into custody on June 30th last.

The court heard that he first arrived in Ireland in 1998 and was refused asylum but returned the following year, under the assumed name of Eduard Preda, and granted asylum. He then began collecting social welfare using this false identity.

When Romania joined the EU in 2008, he became eligible to collect social welfare under his own name and began doing so, while also collecting payments as Eduard Preda.

Between 1999 and mid-2015 he collected a total of €280,828 using the two identities, Garda Kevin Heffernan, on secondment with the Department of Social Protection, told the court.

He received €161,000 of this under the name Eduard Preda during that 17-year period, and the remainder under his own name.

In recent years, the Department of Social Protection introduced a new public service card which meant that every person receiving a payment was invited into a departmental office and had their photo taken.

“Eduard Preda” was invited in 2015 and had his picture taken, and in June 2016 Adrian Vaduva was similarly invited.

Mr Vaduva was brought to Wexford garda station and interviewed a number of times.

Search warrants were obtained in relation to the accused’s home at Riverchapel near Gorey, and also for a property he was renting in Wexford town. The latter apartment was found to be completely empty of any furniture or possessions, although gardaí­ did find a blue folder which contained a false ID card and other documents under the name Eduard Preda.

Mr Vaduva was renting this apartment using the false name. He was paying €400 a month in rent but receiving almost €1,000 in payments.

“It was an elaborate scheme,” Garda Heffernan said.

The accused co-operated fully with the investigation after his arrest. “Without his honesty it would have been difficult to prove the case back to 1999,” the court heard.

The garda agreed with John Peart SC, defending, that the accused hadn’t accumulated any of the money, and was using it “to live”.

Mr Vaduva was visibly distressed throughout the court hearing and cried while being sentenced.

Judge Barry Hickson said “greed got the better of him, for whatever reason” since he arrived in Ireland.

The accused seemed to be a “rather emotional man” and his probation report indicated that some family members had died in recent years and he had three children in Romania, one of whom was seriously ill.

“Nonetheless, these are serious offences. The Irish social welfare system has been deprived of almost €300,000, which could have been used to assist other people in need,” the judge said.

He sentenced him to three years’ imprisonment on each of five representative charges, to run concurrently, and suspended the last nine months, backdating the term to June 30th last.