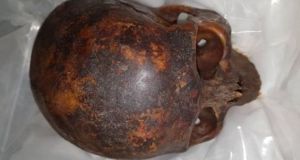 Gardaí managed to recover the head of an 800-year-old mummy, known as the Crusader, which was stolen from a crypt in St Michan’s Church in Dublin.

A man who pulled off the mummified head of an 800-year-old Crusader from a crypt and stole it has being jailed for 28 months.

After his arrest Brian Bridgeman (36) told gardaí­ that he woke up in the crypt in St Michan’s Church, Church Street, Dublin and didn’t know where he was.

“I thought I was dreaming, it wasn’t reality,” he told them.

He said he didn’t remember damaging the coffins and skeletons and said he was “was out of my head” on alcohol and Xanax tablets.

After leaving the church he fell asleep in town and realised when he woke up again that he had two skulls in his bag.

He said he panicked and wanted to bring them back but was afraid of being caught. He said didn’t think it was funny.

Dublin Circuit Criminal Court heard that a few weeks later he left the skulls in a bag in a hedgerow on the church ground with a note stating “sorry RIP”.

Bridgeman of Fortlawn Park, Blanchardstown, Dublin was identified on CCTV in the area and later pleaded guilty to burglary of the vaults between February 23rd and 24 last. He also admitted five counts of criminal damage, including two of damaging a dead body.

The court heard that the crypt’s tour guide discovered the break in on February 25th and that the outer wrought iron doors were opened and an inner metal door was pulled down.

A lock on the Hamilton family vault was damaged and one coffin, at the bottom of a stack of three others, was broken with parts of the coffin on the ground.

He was horrified to find that the 300-year-old mummy of “the nun” was interfered with. Some of the bones were broken and the head was set at an almost 180 degree angle to the body.

Another mummy had being turned to one side in its coffin and the crusader’s body was decapitated and smashed up. Another skull which had been placed on a coffin was missing.

In a victim impact statement Reverend David Pierpoint, vicar of parish of St Michans, said the burglary was devastating to clergy and parishioners.

He said the parish relied on income from tour guides of the crypt and from parishioner’s donations and the break in resulted in a loss of €35,000 in revenue and €15,000 on repairs and security.

Michael Hourigan BL, defending, said his client deeply regretted what he did due to it being a crime against the heritage of the local area. He said that Bridgeman was deeply ashamed of desecrating human remains.

Mr Hourigan said he comes from a good family, but started falling into addiction at a young age. He said his client has had mental and behavioural disorders as a result of this addiction.

Judge Martin Nolan said Bridgeman was in some stupor induced by alcohol and drugs but said this was not an excuse.

“These skulls represent a lot to people of religious belief,” he said. He said that the sight of one hacked from their bodies caused considerable distress .

“I suspect he is a menace at times,” said Judge Nolan in reference to Bridgeman’s history of previous convictions.

Judge Nolan said that looking at Bridgeman in court “it is difficult to analyse his behaviour”. He concluded by saying that a church is a particular place of significance to people of faith and that the accused should not have burgled the church.