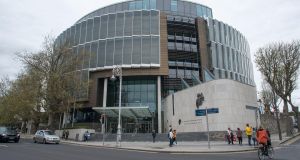 A man has been jailed for the repeated sexual assault of a four-year-old child his partner was babysitting. Photograph: Dave Meehan

A man has been jailed for 8½ years for the repeated sexual assault of a four-year-old child his partner was babysitting.

The case saw one of the youngest complainants ever giving evidence and being cross-examined during a nine-day trial at Dublin Circuit Criminal Court. The 59-year-old man, who cannot be named to protect the identity of the victim, denied the charges.

He was convicted in January of two charges of sexually assaulting the girl at his Dublin home on dates between July 2016 and July 2017.

After the conviction, a message on a Facebook page revealed the man’s name and address and incited violence against his family and the family home. Judge Elma Sheahan said this was completely unacceptable but noted there was no suggestion that the message was linked to any of the parties in the case.

Pauline Walley SC, prosecuting, previously told the court that it would be wrong to take the Facebook posting into account given they didn’t know the source of the posting.

John Fitzgerald SC, defending, submitted that the court was entitled to take “extra-judicial punishment of this nature” into consideration when imposing sentence.

Judge Sheahan noted the matter was under Garda investigation and said she would take it into consideration.

The man’s family had been very friendly for a number of years with the child’s mother and his daughter and wife began minding the child when she was an infant. During the summer of 2017 the child told her mother that the man had licked and touched her “bum”, by which she meant her genital area.

Judge Sheahan said the offending was an “egregious breach of trust” on a vulnerable child. She said it involved premeditation, noting on some occasions the man molested the child on a couch under cover of a blanket while others were in the room.

She noted the psychological effects on the child as set out in the victim impact statement of the child’s mother. In that, the mother said the child suffers night terrors and bed wetting and had to move school to avoid any altercations on the playground.

Dr Charlotte Murphy, a forensic scientist with Forensic Science Ireland, told the trial that she determined that DNA found on a saliva stained section of the child’s underwear matched the DNA profile of the accused man.

Judge Sheahan noted that the man does not accept the jury verdict and, accordingly, there was no expressions of remorse.

She set headline sentences of seven years and 9½ years for the two offences. After noting the mitigating factors in the case, she reduced these to 6½ and 8½ years, to run concurrently.

She said that because he refuses to accept the guilty verdicts there was nothing to justify suspending a portion of the prison term to incentivise rehabilitation.