Man jailed for eight years over ‘tsunami’ of crimes in Tallaght

William Nolan ‘off his head on drugs’ when he endangered lives of two gardaí, court hears 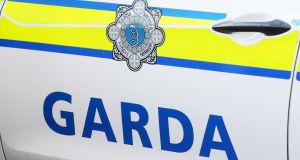 William Nolan was described in court as a a man with a significant gambling and drug debt who ‘could not control himself’.

A father-of-two who crashed a van into the front of a petrol station during “a tsunami of criminality” has been jailed for eight-and-a-half years.

William Nolan (30) caused €68,000 in damage to the store front and then endangered the lives of two gardaí ­ while attempting to flee the scene.

Nolan of Kiltalown Path, Jobstown, Tallaght, Dublin pleaded guilty at Dublin Circuit Criminal Court to counts of burglary, criminal damage and endangerment at various locations in Tallaght on May 4th, 2019.

He also pleaded guilty to burglary at Allied Foods, Tallaght, on March 29th, 2019. Nolan was on bail for this offence when he committed all subsequent offences in May.

The court heard that in the early hours of the morning on the date in March, Nolan entered the employee area of Allied Foods with a hatchet and damaged two vending machines.

Garda Robert Witty told Pieter Le Vert BL, prosecuting, that in the early hours of the date in April, Nolan first attempted to break into a Circle K petrol station at Blessington Road, Tallaght. He caused damaging to electoral wiring and the back door which had to be replaced.

Garda Witty said Nolan then stole a van from an address at Belfry Court, Tallaght. The van was equipped with GPS by its owner’s employer and they were able to track its movements throughout the day.

Nolan then broke into a Spar shop in Priors Gate, Tallaght, by smashing a side window. He stole two bottles of spirits, €100 in scratch cards and €800 in cash.

Gardaí ­ investigating the Spar burglary were informed that a white van had been parked outside during the break-in and they tracked it to the forecourt of a Maxol petrol station at North Tymon Road, Tallaght.

The van had been driven into the garage, destroying the front entrance and causing €68,000 in damage. Gardaí spotted Nolan and shouted at him to stop what he was doing, but he instead ran back to the stolen van.

Garda Dylan McGrath climbed into the van after Nolan and tried to reach for the keys, but the defendant put his foot on the accelerator. Garda McGrath was left hanging out of the van as it began to move and was forced to exit the vehicle.

Garda Aisling Conway had been standing in front of the van and had to jump out of the way as it drove off. Gardaí ­ attempted to follow the van but were unsuccessful.

Later the same morning, Nolan burgled a home at Kingswood Heights, Tallaght. Nolan stole numerous items including jewellery, cameras and a watch that belonged to the deceased son of the residents.

Nolan also stole a van that belonged to one of the occupants. The defendant was arrested at The Square Shopping Centre, Tallaght, after stealing a vape machine from a shop and damaging a basketball machine in a casino. Several items, including a wedding ring, were recovered upon his arrest.

Nolan has 127 previous convictions. He has been married since he was aged 19 and has two children.

Garda Witty agreed with Sarah-Jane O’Callaghan BL, defending, that there appeared to have been no planning or premeditation by her client for any of the offences. He agreed that when arrested, Nolan was “off his head” on drugs.

Ms O’Callaghan described her client as being a man with a significant gambling and drug debt who “could not control himself”. She said her client does not have a recollection of the crimes or of the location of the stolen items which have not been recovered.

Judge Pauline Codd said the offences seemed to be “a tsunami of criminality” which all occurred in one spree. She said the gardaí­ must be commended for their bravery when trying to apprehend Nolan.

She suspended the final six months of the sentence on strict conditions, including that Nolan follow all directions of the Probation Service for one year post release.