Money taken by John Murphy (66), from Killiney, meant to fund trips to Lapland 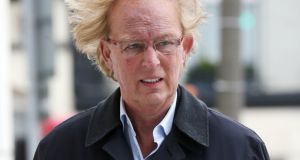 John, also known as Cornelius, Murphy (66), of Church Road, Killiney, Dublin, arrives at the Dublin Circuit Criminal Court whre he was found guilty of stealing over €18,000 from a charity he founded which sent terminally ill children to see Santa. Photograph: Collins Courts.

A travel agent who set up a charity which sent terminally ill children to Lapland has been given a suspended sentence for stealing over €18,000 from the organisation.

John Murphy (66), also known as Con Murphy, received the non-custodial sentence despite Judge Patrick McCartan expressing concerns that he is involved in similar behaviour with a new charity he set up called the Make it Happen Foundation.

Judge McCartan suspended a three year sentence on Wednesday after hearing Murphy’s family had raised the full amount to compensate for the theft. He also took into account Murphy’s age and poor health and said the sentence recognises “the breach of trust and goodwill.”

The Children to Lapland Appeal has since gone into liquidation so the money will be split between Crumlin Children’s Hospital and Barretstown camp for children, “a charity which is dear to my heart and close to where I reside”, the judge said.

Murphy, of Church Road, Killiney, was convicted at Dublin Circuit Criminal Court after a two day trial and 42 minutes of jury deliberation.

The charity was founded by Murphy in 1987. It raised money from donations to bring terminally ill children on trips to see Santa Claus in Lapland. Murphy also operated United Travel, a travel agent based in Stillorgan, before it went out of business in 2012.

Murphy had pleaded not guilty to four counts of theft between June and July 2010 in the Dublin area totalling €18,643.

At sentencing Detective Garda Brian Daveron said since the trial he has made enquires with the Make it Happen Foundation which sends sick children on day trips around the country.

The charity was set up in 2012 after the Children to Lapland Appeal ceased operating. The detective said he spoke to the directors who said they were directors in name only and that Murphy effectively ran the foundation.

The two directors said they have since distanced themselves from it because of concerns over the way the finances were being handled.

Judge McCartan said he had “very grave misgivings about this behaviour”. He said it appeared Murphy had wound down one charity and started up another and that the concern is that he’s up to the same thing again.

The judge said he couldn’t take this into account when sentencing but banned Murphy from engaging in fundraising for three years as part of the terms of his suspended sentence.

“Your client needs to be on notice that he’s under the microscope”, the judge told Patrick Reynolds BL, defending.

Mr Reynolds submitted that The Make it Happen Foundation was dissolved in January of this year.

He said Murphy had no access to the bank accounts and that money was raised through packing bags in Tesco. He said he was not aware there were concerns about the foundation.

Det Garda Daveron previously told Garrett McCormack BL, prosecuting, he began investigating the Children to Lapland Appeal after a complaint about how it was being run. He obtained court orders for access to the charity’s account and Murphy’s personal accounts.

He discovered four cheques had been written from the charity’s account and lodged in Murphy’s personal account.

In mitigation Mr Reynolds said his client was diagnosed with bladder cancer in 2010. Murphy currently lives with his sister who is also in bad health.

Mr Reynolds said it was not a sophisticated or covert crime. He also pointed out that some money went back from Murphy’s account into the charity’s account after the €18,000 was stolen.

1 Asylum claims by Georgians and Albanians brought to abrupt halt
2 Snow on the way as Ireland’s weather set to turn colder
3 Fianna Fáil pledges prudent spending if in government
4 Miriam Lord: Does anyone care if Leo smoked or snorted?
5 Case over pregnant woman kept on life support settled for €1.5m
Real news has value SUBSCRIBE