Man accused of assaulting garda claims he was beaten with tie

Stephen Tuohey alleged to have punched, kicked and spat at Garda John Santry 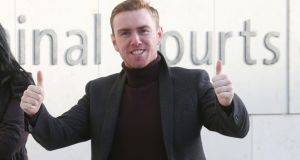 Stephen Tuohey at Dublin Circuit Criminal Court where he has pleaded not guilty to assaulting a garda. Photograph: Collins

A man accused of assaulting a garda claims the officer attacked him instead and beat him with his Garda tie.

Stephen Tuohey (25) is alleged to have punched, kicked and spat at Garda John Santry in his cell. Mr Tuohey said on Wednesday that Garda Santry antagonised him before throwing him into the cell and beating him.

Mr Tuohey of Inglewood Drive, Dublin 15, has pleaded not guilty at Dublin Circuit Criminal Court to assaulting a peace officer in Blanchardstown Garda Station on the morning of June 25th, 2011.

The prosecution maintains the footage shows Mr Tuohey becoming aggressive towards the garda because he could not have his own clothes and Garda Santry putting him back in his cell for safety reasons. It states that this was when the garda was attacked.

The defence says the footage instead shows Garda Santry becoming aggressive to Mr Tuohey and “getting up in his face” before throwing him into the cell and beating him.

Garda Santry told prosecuting counsel Derek Cooney BL that he was acting as jailer that morning, meaning he was responsible for checking on the prisoners and filling out the custody record.

He said he checked on Mr Tuohey several times that morning. He said the prisoner was banging his cell door and covered the viewing hatch with his mattress and with pieces of paper which had to be removed.

Garda Santry said at one point Mr Tuohey told him to “F off and used the C word”.

The garda said the prisoner demanded a phone call and he replied that he could not have one until he calmed down. He said on another occasion, when he was removing paper from the hatch, Mr Tuohey “lunged” at him.

The garda said that at 9am he opened the cell to bring Mr Tuohey to court. He said the prisoner again lunged at him and grabbed at his clip-on tie which came off. Garda Santry said he pushed him back into the cell and “roared” for assistance.

He said Tuohey spat, kicked and punched at him before other gardaí arrived and helped restrain and handcuff the accused. The garda said he suffered minor injuries, but did not need medical attention.

Defence counsel Kieran Kelly BL suggested Garda Santry was antagonising his client by not giving him his right to a phone call. The garda denied this, asking what would be the point.

“It makes no sense to wind up prisoners,” Garda Santry said. “When prisoners are calm everybody’s happy.”

Counsel put it to Garda Santry that he assaulted the accused, and was “now trying to dress it up as an attack on you”. The garda denied this.

Mr Kelly submitted that the garda pushed Mr Tuohey back into his cell where he took off his tie and beat him with the knot. He said the accused received blows to the ribs, was left gasping for breath and thought he was going to be killed. He said that a short time later Garda Santry told Mr Tuohey: “I have a can of pepper spray with your name on it.”

Garda Santry denied all of this, telling Judge Petria McDonnell: “These are actually just lies judge.”