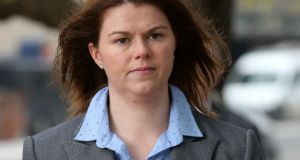 Evidence in the trial of Sandra Higgins, who has denied charges of intentionally or recklessly causing serious harm to a baby at her home in 2012, is due to begin on Monday afternoon.

A jury has been sworn in for the second retrial of a Cavan child-minder accused of causing serious harm to a baby.

Sandra Higgins (36), of The Beeches, Drumgola Wood, Cavan town, Co Cavan denies a charge at Dublin Circuit Criminal Court of intentionally or recklessly causing serious harm to the baby at her home on March 28th, 2012 .

On Monday morning Judge Cormac Quinn told a jury panel the case had gone to trial on two other occasions. He said these trials were accompanied by media coverage.

He told the jurors that in order to serve as a jury for this trial it was crucial they felt they would not be affected by anything they had seen or heard in the media.

Judge Quinn said it is alleged the defendant assaulted the ten-month-old baby. He said it will be alleged that on March 28th, 2012, the baby presented at hospital with non-accidental injuries.

He told the jurors they could not and should not discuss the case with anybody outside the jury.

The court heard the trial is expected to hear evidence from a number of civilian and garda witnesses from Co Cavan. The defence may also call a paediatrician from Wales to give evidence.

A jury of six men and six women were subsequently empanelled. The court heard the trial is expected to last two weeks before Judge Quinn and is scheduled to begin in evidence on Monday afternoon.

Taoiseach dramatically sacks Barry Cowen as minister over drink-driving controversy 08:42
Cowen ‘surprised and disappointed’ after being sacked on the phone by Micheál Martin 07:46
Covid-19: Overseas visitors are causing ‘stress and anxiety’ in some areas, TDs say 05:10
Three visitors investigated by Garda after refusing to fill in locator form 04:45
Irish peacekeeping veterans sue the State over ambush of convoy in Syria 03:01