Judge sends burglar who broke into his house to different court 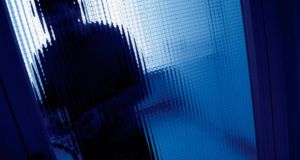 A judge has sent a serial burglar to another court for sentence after hearing that the man had previously broken into his house.

Vincent McNally (32) was due to be sentenced by Judge Martin Nolan. However his defence counsel told him it may be best for another judge to deal with it.

“Are you saying Mr McNally burgled my house?” the judge asked, adding that he had been burgled twice in the past.

Counsel replied that this was the case.

McNally of The Court, St Anne’s Park, Shankill, Dublin pleaded guilty at Dublin Circuit Criminal Court to three burglaries in the Shankill area in February 2014. He also admitted possession of gloves with intent to commit burglary in Shankill on April 28th, 2014.

Judge McCartan later described McNally as “a serious committed criminal” and remanded him in custody pending sentence until May to allow for him to be assessed by the Probation Service.

“My first reaction was to send you to prison for as long as the law permits me to and at some stage you would get to grow up and realise there is a time to stop,” Judge McCartan said.

He noted from McNally’s record that he was jailed for almost every offence he committed.

Judge McCartan said he was ordering a report from the Probation Service “to see what can be done with the likes of him” and added that if McNally has any interest in dealing seriously with his problems he would give him a chance.

He said he wanted there to be “concrete evidence” in the report that McNally has “an interest in anything but breaking into people’s property”.

“If he can mend his ways I’ll give him a chance,” Judge McCartan said before he adjourned the case to May 25th.

The court heard that the homeowners returned to their properties to find their front doors had been forced open and their house had been ransacked.

In the first burglary €5,000 worth of property had been taken including jewellery, watches and a flat screen TV, while in the second raid a laptop, a TV, a DVD, games consoles, controllers, phones and jewellery were taken.

In the final burglary a laptop, an iPad and jewellery was stolen and a neighbour witnessed McNally in the house and leaving it.

This man later provided gardaí­ with a description of the burglar and went on to point him out in a booklet of photos leading to McNally’s arrest.

Garda Ivor Scully told Lorcan Staines BL, prosecuting that a colleague witnessed McNally putting on a pair of gloves and trying to force open the door of a house in Shankill. McNally didn’t gain entry and he was later arrested on suspicion of attempted burglary.

Colman Fitzgerald SC, defending, said his client was a chronic heroin addict who spent most of his teenager years “in one institution or another”.

He said he has been trying “to break the cycle of criminality with and without great success”.