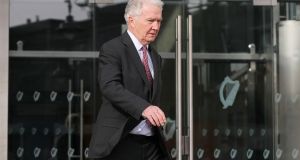 The former auditor of Anglo Irish Bank has told the trial of Seán FitzPatrick that loans linked to the accused made up a very small portion of the bank’s loan book.

Mr FitzPatrick (68), the bank’s former chairman, is accused of misleading auditors about multimillion euro loans from 2002 to 2007. He has denied all charges.

On his third day under cross-examination one of the banks auditors, Kieran Kelly, who is a partner with audit firm EY (previously Ernst & Young), agreed that Mr FitzPatrick’s loans made up a “very small” percentage of Anglo’s entire loan portfolio. He said it would be around 0.2 per cent of the bank’s loan book, which in 2002 stood at around €19 billion.

Bernard Condon SC, defending, put it to Mr Kelly that the loans to directors represented a very small figure in the context of the overall balance sheet of the bank and that any likely impact was considered small.

Mr FitzPatrick of Whitshed Road, Greystones, Co Wicklow has pleaded not guilty to 27 offences under the 1990 Companies Act. These include 22 charges of making a misleading, false or deceptive statement to auditors and five charges of furnishing false information in the years 2002 to 2007.