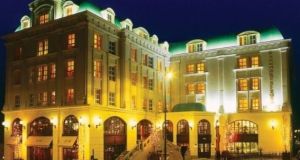 An engineering company, now in receivership, has been fined €750,000 after a lift it installed in a Co Kerry hotel collapsed four floors, causing injuries to five family members who were attending a wedding.

The lift was installed, and for a time maintained, by Ellickson Engineering Ltd, which went into receivership shortly before the lift collapsed at the Killarney Plaza Hotel on July 9th, 2011.

The company was found guilty at Tralee Circuit Criminal Court in March of a single breach of the Safety, Health and Welfare at Work Act over the installation of the lift in and around April 2004.

The lift was an accident waiting to happen, and the incident was the result of historic damage incurred from the time of its installation, the court had heard.

A Health and Safety Authority investigation established that a safety space and electrical system for the security of maintenance personnel working in the specialised lift system had never been installed.

Lead investigator Vincent Darcy said the installation of the lift was “a disaster” from start to finish.

The case had been adjourned to Wednesday to allow time to investigate what assets were available so the fine could be determined.

Judge Thomas E O’Donnell noted on Wednesday that the charge related to the lift’s installation in 2004 – not the “appalling” injuries the members of the Meehan family received in the incident.

It was an unusual trial, the judge said, as there had been no appearance by Ellickson Engineering Ltd.

Forensic accountant James O’Connor gave evidence that in 2008, the last time it had filed returns, Ellickson Engineering Ltd had more than €8 million in assets.

However, he said that a receiver was appointed to the company by a financial institution in March 2011 and now the firm had “effectively nothing”.

Fining the firm €750,000, which is to be paid in three months, the judge said that the file in the case should be referred back to the Director of Public Prosecutions in order to go “behind the veil of incorporation” and see if there could be further prosecution.

He paid tribute to the Meehan family and noted that they were pursuing civil claims against a number of parties in relation to the incident.