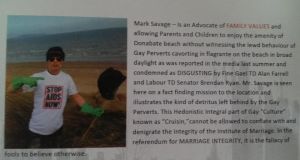 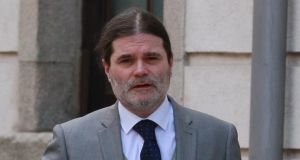 A Co Dublin man has asked a court to direct that Google take down published items which, he claims, wrongly brand him as a homophobic.

Mark Savage, of Lios Cian, Swords, is seeking judicial orders in the Circuit Civil Court against the Data Protection Commissioner and Google Ireland.

Following a brief court appearance, he told reporters that when he had stood as a candidate in a local election in his area he had “for public safety reasons highlighted as one of my election issues the use of Donabate beach by perverted gay men”.

Mr Savage said a number of defamatory remarks had afterwards been maliciously published by a number of people on Google to “deliberately mark me out as a homophobic, which I am not”.

Mr Savage said he had been refused a Google take-down request and when he had asked the Data Protection Commissioner to follow up on the matter, he had been “put off” on the basis that both parties had been awaiting the outcome of European Commission guidelines on such publications and take-down issues.

He said he had now been put in a position in which anyone Googling him were immediately met with statements under a headline: “Mark Savage, North County Dublin’s Homophobic Candidate.”

Mr Savage’s application had been listed for mention so the court could be informed as to how long it might take to deal with a trial of the issues. He told Circuit Court President, Mr Justice Raymond Groarke, it would take about two hours.

He told the judge that since the matter was of such public interest, he would be asking for a protective costs order to be made so that, should he lose the case, he could not be met with a substantial legal costs bill.

Barrister Paul Anthony McDermott, who appeared for the Data Protection Commissioner, said Mr Savage should issue a motion in which he could formally apply for a protective costs order, the granting of which was a matter for the court.

Mr McDermott said an issue of discovery which Mr Savage was seeking regarding correspondence between the Data Protection Commissioner and Google could also be dealt with at the same time.

Judge Groarke adjourned the matter until July so that both motions could be heard together.

Google Ireland was not represented in court.

Mr Savage received 129 first preference votes in the Swords district in the 2014 local election. He was not elected to Fingal County Council.