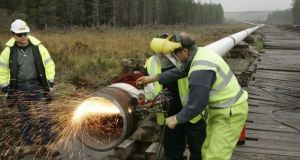 The Corrib gas tunnel is scheduled to be 4.8km-long and will stretch under Sruwaddacon Bay to the Ballinaboy terminal. Photograph: The Irish Times

A German civil engineering company involved in building the Corrib Gas tunnel has been fined €300,000 following the death of a contractor.

The firm pleaded guilty to breaches of health and safety legislation leading to the death of hydraulic technician Lars Wagner (26) on September 8th, 2013.

Castlebar Circuit Criminal Court was told on Tuesday morning the German national died instantly from “catastrophic head injuries” after a pressure surge in a pipe tore a joint apart while he carried out work on an oil spill in the tunnel boring machine.

The director of the tunnelling division of Wayss and Freytag, Ingenieurbau AG, Dr Klaus Richter, pleaded guilty on behalf of the company, which was charged with failing to stop work on the boring machine while Mr Wagner cleaned an oil spill in a chamber.

Brendan Grehan SC, on behalf of the DPP, withdrew charges against another contractor, BAM Civil Ltd.

Wayss and Freytag, Ingenieurbau AG and BAM Civil Ltd were joint venturers, contracted by Shell E&P Ireland to build the 4.8km-long tunnel, which stretched under Sruwaddacon Bay to the Ballinaboy terminal.

Judge Rory McCabe was told the victim died instantly after a pressure surge in a pipe tore a joint apart while he carried out work on an oil spill in a small chamber of the machine. The prosecution argued the machine should have been stopped during such work.

“At the time the victim was in a gear chamber behind the head of the machine trying to clean an oil leak. A surge in the slurry feed system caused a joint to collapse and he was hit on the back of the head,” Mr Grehan said.

Health and Safety Authority (HSA) inspector Greg Murphy said safety manuals for the machine stipulated that it must be stopped during maintenance work.

“Mr Wagner had come in for work at 6am and was told by staff that there had been an oil spill and to go down to clean it. He was mopping up the oil while the machine continued to advance on its ring-building to build the \[4.2m outer dimeter of] the tunnel,” Mr Murphy said.

Pleading for mitigation on behalf of the company, Remy Farrell SC said it was “a freak accident”, that there was no level of “foreseeability” and that such an incident had never occurred anywhere previously.

He argued that the boring machine had been stopped on all other occasions when the victim was carrying out maintenance, but on this occasion he was cleaning. He highlighted the excellent health and safety record of the project.

However, Mr Grehan said: “Any discussion on whether this was maintenance or cleaning simply doesn’t arise. Whether he had a wrench or a rag in his hand doesn’t matter.”

Noting how “dangerous” this work was, the judge said “the fact is that he was there and nobody knew he was there who was in a position to stop the machine”.

In summary, he said “ the defendant failed in his duty and Mr Wagner lost his life” because of “a communications failure”.

Mr Wagner’s parents and sister were in court. They declined to comment afterwards and were due to fly out from Ireland West Airport Knock in the company’s private jet.

Afterwards, Brian Higgisson, assistant chief executive of the HSA said: “Maintenance operations can be dangerous and should always take place in a planned and controlled manner. The most important consideration is to make sure that work does not place anyone in danger, in this case the failure to follow safety procedures led to tragedy.”