Sionad Jones described herself as ‘a conscientious protector of the environment’ 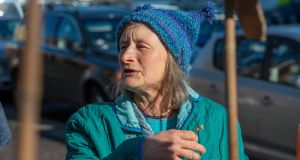 Sionad Jones (61) told the court: ‘I’ve been managing the forest for at least 20 years because of Coillte’s neglect of its duties.’ Photograph: Michael MacSweeney/Provision

A grandmother who described herself as “a conscientious protector of the environment” has gone on trial on charges of damaging a Coillte Sitka spruce plantation after cutting down over 250 trees with a chainsaw.

Sionad Jones (61) from Maughnaclea, Kealkill, Bantry, Co Cork denied the two charges when she was arraigned in front of a jury panel at Cork Circuit Criminal Court sitting at Anglesea Street Courthouse on Wednesday.

Ms Jones also denied a second charge that she did dishonestly appropriate felled spruce worth €500 without the consent of Coillte at Maughnaclea, Kealkill between October 4th and December 4th, 2018.

Coillte employee Donal Murphy told the court he became aware of chainsaw activity at the Coillte plantation at Maughnaclea on November 23rd, 2018 and he visited the site on December 3rd where he found trees had been cut down.

He found other trees had been ringmarked with a notch cut in the bark of the tree all the way around the trunk which ultimately would lead to the trees dying so he reported the matter to his line manager.

Mr Murphy visited the plantation again on December 4th and saw more trees had been cut down so he reported it again to his line manager who in turn reported the matter to gardaí in Bantry.

Garda Fintan Coffey told the court that he visited the Maughnaclea plantation on December 4th, 2018 when he encountered Ms Jones driving out of the forestry in her green Toyota Starlet so he stopped her.

She was covered in sawdust when she got out of her car and he noticed she had a chainsaw in the car and after he cautioned her, she told him that she had been felling spruce trees in the forest which she knew belonged to Coillte.

He said he observed a large clearing of spruce trees in the forest where he noticed recently felled stumps, stacked logs and ring-marked trees as well as broad leaf trees which had been planted in the ground.

Ms Jones agreed to come into Bantry garda station where she made a voluntary statement in which she said she was felling Sitka spruce trees in the plantation while she had replaced the felled trees with broadleaves, he said.

She told gardaí that she had planted 46 broadleaf trees in place of the spruce she had cut down and they consisted mainly of birch trees but also included hazel, oak, alder, crab apple and rowan.

“This morning I was sawing down a few Spruce trees in order to create space to plant different trees, proper trees, native trees,” said Ms Jones adding that she had been cutting down spruce there for 20 years and planting broadleaves.

Ms Jones took the stand to explain that Sitka spruce was not native to Ireland and was having a huge detrimental effect on Irish biodiversity as the trees spread out as they grew and their branches interlinked, blocking out light.

It meant that these Sitka Spruce plantations were devoid of plant and animal life with plants such as orchids and bilberry plants no longer able to survive there while insect and bird life was also negatively impacted, she said.

The other particular problem with the Sitka spruce plantation at Maughnaclea was that the pine needles from the spruce led to acidification of the water courses which had in turn led to the water in her well become acidic.

Broadleaf trees have the opposite effect of making the water courses alkaline so that was another reason why she had taken to planting broadleaves as well as trying to restore the biodiversity associated with native Irish forests.

Cross-examined by prosecution barrister, Brendan Kelly BL, Ms Jones described herself as “a conscientious protector of the environment” which she said had the same legal standing as conscientious objectors who refused to go to war.

Asked if she accepted Coillte owned the Maughnaclea plantation, Ms Jones said she acknowledged Coillte managed it on behalf of Irish taxpayers but she believed the forest belonged to the people of Ireland and should be protected.

“I’ve been managing the forest for at least 20 years because of Coillte’s neglect of its duties to the Irish people. I took over as a concerned citizen who has a duty of care to ensure biodiversity,” she said.