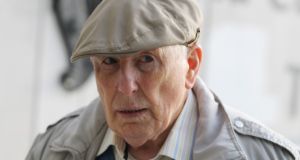 An alleged victim of a retired surgeon who denies groping teenage boys has told a trial he called the doctor a “dirty bastard” in a crowded hospital hallway.

Michael Shine (85) denies eight charges of indecently assaulting patients at Our Lady of Lourdes Hospital and at his private clinic, both in Drogheda, Co Louth, on dates between 1964 and 1991.

On day four of the trial, a fifth complainant told the jury that he was aged about 15 in 1990 and had a broken ankle. He said a plaster cast was set on the foot and he was given an appointment to return later to have it removed.

He when he returned to Mr Shine’s fracture clinic with his mother the waiting area was filled with people. He said Mr Shine saw him and called him in and he found this unusual as he had just arrived and there were about 80 people already waiting.

He said he could hear some people giving out that they had been waiting before he arrived.

Dr Shine told him he was checking for blood clots there that might occur from having plaster of Paris on, he told the court. He said the doctor moved his hand down to his left leg and ankle and then moved his hand back up and then down his left leg.

He said when the examination ended he went back into crowded hallway outside the room and shouted “that dirty bastard is after touching me”.

The complainant’s mother testified that she was also there and was embarrassed by her son’s words and she gave out to him. She said she knew some people who were in the waiting area.

She said earlier that she was shocked when the doctor called out for her son to come in ahead of all the people waiting.

She said her son called the doctor a “dirty bastard” and said “he was feeling me in there, touching me and feeling me around”. She said he was very upset and was still giving out when they got home.

Hugh Hartnett SC, defending, put it to the complainant that there were no hospital records provided showing his attendance at the hospital in 1990 or 1991.

He said that there is an X-ray record in 1988 in his name which refers to a left foot with no fracture noted. The witness said he never had an injury to his left foot.

He told Mr Hartnett that in 1988 he did have surgery on his left testicle and he said he described this in a statement to gardaí as surgery to his stomach.

He said Mr Shine had carried out the procedure in 1988 and in doing so he had to examine his testicle and would have also met him after the surgery to check his testicles were operating normally.

He accepted he had a history of psychiatric care but denied ever experiencing paranoid delusions. He also denied ever telling a counsellor that he was abused twice by the defendant.

He is also accused of indecently assaulting a male on two occasions in a clinic in Drogheda on unknown dates in 1973 and 1974 and in 1975.

The trial continues before Judge Cormac Quinn and a jury of four men and eight women and is expected to last two weeks.