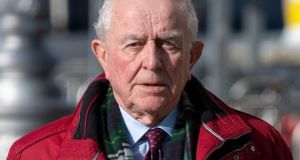 Patrick Harte, of Glendown Park, Templeogue, Dublin had denied the charges and in a speech to the court he claimed that the State had “validated” his teaching at the time and could not now “invalidate it”. Photograph: Collins Courts

A child sex abuse victim of a former school principal has said he had no idea his abuser was attacking other boys in the school.

At his sentence hearing on Thursday the court heard that when gardaí put the victims’ allegations to Harte in 2015, the former teacher claimed they had “a vendetta against him”.

Anne Rowland SC, prosecuting, told the court that there is no evidence that any of the victims were ever in contact with each other since the offending took place. Detective Garda Garvan Ware said “as far as I’m concerned, they are all independent”.

Harte, of Glendown Park, Templeogue, Dublin had denied the charges and in a speech to the court he claimed that the State had “validated” his teaching at the time and could not now “invalidate it”.

He said “I abhor all forms of child abuse, discrimination and social injustice” and told Judge Martin Nolan that he would go to “the High Court” if his sentence reflected a “sectarian” motivated prosecution.

The court heard that Harte repeatedly and continuously molested the children amidst an atmosphere in his class of severe corporal punishment and verbal abuse.

Victims testified at the trial that he would find reasons to call them up to his desk, sometimes for praise and other times for correction of minor misbehaviours. He would warn the rest of the class to look at their books and not raise their heads before proceeding to fondle the boys’ genital areas.

Ms Rowland told the court that three of the victims wished to waive their anonymity. Asked about this, Dermot Hallion confirmed this was the case, saying “Yes, I didn’t commit any crime”.

He told the court that the abuse continued to affect him into adulthood, causing him to feel worthless and low in confidence.

Fr Tony Conlon, now a Catholic priest, said the abuse had “a paralysing effect” on his life and prevented him from achieving so many things in life.

“Throughout my life I always believed I was the only one, I had no idea there were others who suffered. I felt I had done something wrong and afraid I would be found out” he said.

He said he was terrified someone would find out he was the victim of child abuse and that this might cause them to think he would be an abuser himself.

Kevin Byrne told the court the fact that his mother believed him and tried to do something saved him from experiencing worse events later in life. He said his statement is not about vengeance and he is not seeking to inflict hurt.

In his statement a fourth victim told the defendant: “we trusted you, but you let us down , this has been with me all my life and always will be”.

Another victim said that “as an adult and teacher he was to nurture me. Instead his actions demolished all goodness”. He said that Harte played the role of “good teacher, bad teacher”, and this was a ploy.

He said Harte abused his “very privileged teaching position” and betrayed his parents, the Christian Brothers “and the darkest betrayal was trust”.

Ms Rowland outlined to the court evidence that Harte would regularly beat pupils with a leather strap which he constantly had to hand. She said victims described being afraid of him and being punished for the slightest thing.

Fr Conlon told gardaí that Harte once smashed a pupil’s head up against a wall and other victims described “constant beatings” with the leather.

One victim’s mother confronted Harte in the staff room and Harte denied he had done anything wrong.

Dt Gda Ware agreed with Patrick Gageby SC, defending, that the prosecution had not brought any charges of child cruelty or physical abuse against his client.

Harte was due to be sentenced on two occasions earlier this week. On Monday Judge Nolan denied a defence application to adjourn the case for two months because of Harte’s risk of getting Covid-19.

On Tuesday Harte failed to show up again and his lawyers told the court he had gone into hospital with cardiac issues.

After hearing a short plea of mitigation Judge Nolan remanded Harte in custody and adjourned sentencing to 1:15pm on Friday.

He said that based on the testimony of Fr Conlon that he was abused once or twice a week, he was going to take it that the total number of instances of assault against all of the victims was between about 35 to 40.

Harte had pleaded not guilty and gave evidence during the trial in which he strenuously denied the allegations.

Reading from his own victim impact statement Fr Conlon said that he brought his allegations in order to give himself a voice.

He said: “I have sought justice, not revenge, restorative justice, the truth, the purpose of which is to give me a voice.

“I leave here a new man, head held high I can finally start to heal, my eyes are fixed on the future.”

He thanked Judge Nolan, saying “you and the jury have liberated us from the shackles of the past.”

Mr Byrne said he was shocked when the defence counsel thanked him for giving evidence and then said that Harte denies any offences ever took place. He said that statement “rocked me to my core”.

Mr Byrne said that the fact that his mother believed him and tried to do something saved him from experiencing worse events later in life. He said this statement is not about vengeance and he is not seeking to inflict hurt.

Following the victim impact statements being read, Mr Gageby said that his client wished to address the court himself.

Addressing the court directly, Harte said that the state had “validated” his work and the state cannot “invalidate” it “with a campaign against me”.

He said that he rejected and repudiated “the sectarian attitude of the prosecution service”. Harte said that he reserved his right to seek immediate redress in the High Court and has instructed his solicitor to appeal.

Mr Gageby said that his client has always engaged in the process, even though he is disappointed with the result. He said his client continued to work at Synge Street and became principal before retiring at an appropriate age.

Counsel said this was “a very poor end” to a career and to a life lived until this year “free of stain”. He said that the events occurred 50 to 52 years in the past and that no conviction has been recorded against his client in that time.

Mr Gageby said the court was dealing with a 78-year-old man who does not enjoy good health. He said that the acts are all of fondling genitals of young boys and not at the worst end of spectrum of offending.

Counsel suggested the court might engage at least partially in the question of what would have happened if the case was prosecuted in the 1960s.