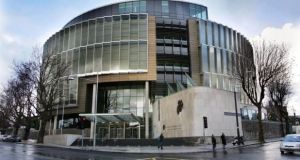 The woman suffered bruising to her arm and elbow and marks around her neck, court heard.

A man who beat his wife around the head with a rolling pin because he was in “a jealous rage” has been jailed for three years.

Vasile Plesca (41) attacked his wife during an ordeal that lasted seven hours when he and another man would not let her leave her flat.

Plesca of Belmont Hall, Dublin city centre, pleaded guilty to assault causing harm to the woman at that address on April 26th, 2017.

Dublin Circuit Criminal Court heard that after hitting her over the head with the rolling pin, Plesca then forced the woman to take off her blood-stained clothes and shower.

The woman suffered bruising to her arm and elbow and marks around her neck.

Video footage, which the victim recorded on a mobile phone, was played in court and showed a woman screaming and breathing heavily. The woman can be heard saying “please, please”.

After his arrest gardaí asked the man if he had choked the woman and he said “I did not strangle her, I don’t think so”.

He said he didn’t bring her to the hospital because he was afraid if he did so the authorities would take his children away.

Padraig Dwyer SC, defending, conceded that what occurred that day was “horrible” and his client is ashamed of his actions.

He said Plesca was in a jealous rage on the day and lost control of himself, adding that “he himself doesn’t understand how he behaved in such a manner”.

Counsel outlined that a psychological report showed Plesca suffers from an intellectual disability and is “operating at the lower end of intellectual functioning”.

He said Plesca has found his time in custody extremely difficult as a first-time offender and as a non-English speaker. The court heard Plesca had an additional €5000 in court to give his wife as a token of his remorse.

Judge Karen O’Connor said this was a serious offence. She suspended the final year of a four year prison sentence.

Referring to the video footage, she said. “I have heard the assault taking place and it’s not something I am going to forget lightly.”