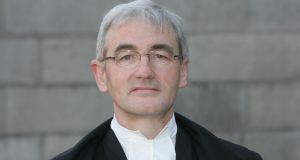 Judge Brendan Toale said he did not consider the alleged offences to be minor and he refused jurisdiction. File photograph: Collins Courts

A then 13-year-old boy trial accused of beating an elderly Luas passenger with an iron bar before mugging him in front of his wife has been referred to the Circuit Court.

The boy, now aged 14, appeared at the Dublin Children’s Court charged with assault causing harm to the 69-year-old man, having the iron bar as an offensive weapon, and theft.

The Director of Public Prosecutions recommended the case should stay in the juvenile court and not be sent forward to the Circuit Court which can impose lengthier sentences.

However, Judge Brendan Toale said he did not consider it a minor offence, and he refused jurisdiction.

The boy, who was accompanied to court by a family member, was remanded on bail.

A book of evidence has to be completed before he can be returned for trial.

In an outline of the allegations, the judge heard that on December 23rd last gardaí received a call from the pensioner who had been travelling on the Luas with his wife.

Garda Ailis McBrien said the man alleged, “the accused got on with an iron bar in his possession, which he used to intimidate the injured party and his wife”.

The court heard the teenager waved it in a manner that intimidated the couple.

When the Luas tram stopped at St James’s Hospital, the boy allegedly took a rucksack from the man who tried to chase him, the court heard.

Garda McBrien said the teenager used the iron bar to beat the man, striking him several times and causing bruising to his lower back and legs.

The injured pensioner was taken to hospital, the court heard. CCTV footage of the incident was available, Garda McBrien said.

The Children Act gives the court wide discretion in relation to accepting jurisdiction for a range of serious offences. Submissions were prepared by the defence on the teen’s age, level of maturity.