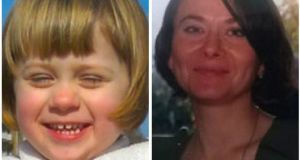 A Child Rescue Ireland alert has been cancelled after a mother and her child who went missing from their home in Co Dublin were located.

“Gardaí wish to express their thanks to all members of the public and media for their assistance in this matter,” a spokesman said.

The alert was issued shortly before 1pm on Saturday and said the two were last seen at 9.45am at Tara in Co Meath.

A later update said the car in which they were believed to be travelling had been spotted in Blanchardstown in Dublin.

The Child Rescue Ireland alert system was launched in May 2012. It is used when there is a suspicion a child has been taken without consent and where a risk to the child’s safety or welfare is also feared.

It involves gardaí supplying information such as the name and description of missing children and the adults they are with, along with details of where they might be or the kind of vehicle in which they are travelling.

The alert is issued through the media but gardaí also use other means to spread the notices, such as electronic road signs that usually warn motorists about driving conditions.

The system is used sparingly in order that its impact is maintained.