Chief suspect in stabbing of mother held in Mountjoy 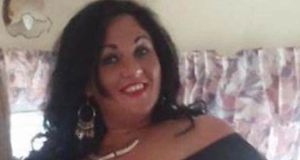 Jennifer Dornan, 30-year-old mother of three, was found dead in the shell of her home at Hazel View, Lagmore, Dunmurry 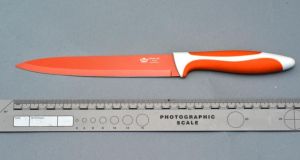 Handout photo issued by the PSNI of a knife similar to one which they believe was used to murder Jennifer Dornan. Photograph: PA 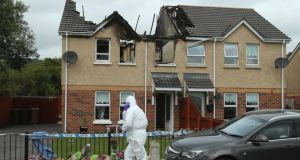 A police forensic officer at the scene of a house fire on Hazel View in Lagmore, Belfast where Jennifer Dornan, 30, was found dead. Photograph: PA

The chief suspect for the murder of a young woman whose remains were found in her burnt-out house on the outskirts of Belfast is in prison after his arrest in Co Donegal.

The man is wanted for questioning by the PSNI in relation to the murder of Jennifer Dornan last Sunday, August 2nd.

The 30-year-old mother of three was found dead in the shell of her home at Hazel View, Lagmore, Dunmurry.

A postmortem revealed she had been stabbed and the blaze was not a factor in her death.

Officers conducting the murder inquiry believe her home, with her remains inside, was deliberately set on fire in a bid to conceal the manner of her death.

A man was seen leaving the house in the early hours of August 2nd and the PSNI had been seeking him for questioning since then.

Ms Dornan had been out socialising with friends the previous night while her three children were being cared for by grandparents. Her partner was not staying in the house at the time.

The PSNI believed the suspect had fled over the Border into the Republic and that he may have travelled south as far as Dublin.

However, after an intelligence-led joint operation by the Garda and PSNI, he was arrested last Friday evening in Co Donegal.

The Irish Times understands while he was being sought by the PSNI in relation to Ms Dornan’s murder and the arson attack that destroyed her home, the 37-year-old was also wanted by the Garda on unrelated criminal matters.

He was arrested in Bundoran on Friday evening because he was unlawfully at large from the prison system.

He was known to both the Garda and PSNI and suspected of other attacks on women before he emerged as a suspect for Ms Dornan’s murder.

“As a result of close liaison between detectives investigating the murder of Jennifer Dornan and our colleagues in An Garda Siochána, a 37-year-old man has been arrested in Co Donegal [on Friday evening] on an unrelated matter,” he said.

Separately, PSNI sources revealed the hunt for Ms Dornan’s killer was no longer focused in Northern Ireland and that its officers were not now seeking anybody in the North in relation to the killing.

After being held overnight in Donegal by the Garda, the suspect was taken under armed escort to Dublin and was returned to Mountjoy Prison in the city where he remains.

The inquiry into Ms Dornan’s murder is continuing in the North, with the authorities there expected to seek the suspect’s extradition under the provisions of the European Arrest Warrant.

Under that mechanism, the man could only be extradited if the PSNI inquiry had been substantively completed.

The Crown Prosecution Service would need to be satisfied there was enough evidence to charge him with murder immediately any extradition occurred.

A PSNI spokesman confirmed consideration was being given to extraditing the suspect.

“There are a number of options we will now be considering to progress this investigation and seeking an extradition order is one of these options.”

The PSNI last Wednesday arrested a 39-year-old man known to the suspect on suspicion of withholding information. He has since been released without charge.