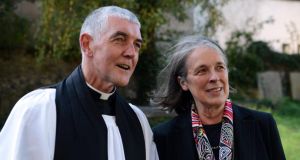 A leading Church of Ireland cleric has urged legislators to “use caution” when preparing changes to the Constitution dealing with blasphemy as an offence.

David Pierpoint, Archdeacon of Dublin, speaking at a service to mark the opening of the new law term today, said caution should be used when changing the Constitution especially on issues of morality.

Referring to the proposed amendment of the blasphemy provision, the Archdeacon said it had been reported there appeared to have been overwhelming support for its removal in submissions to the Constitutional Convention, which has recommended its removal with a date for a referendum yet to be decided.

The submissions were part of a much wider debate including the role of God and religion in the Constitution and the separation of church and state, the Archdeacon said.

“That is not to say the church should interfere in matters of the State or the law but its role should be one of engagement with them in critique and moral guidance acting as a type of moral compass,” he said. “Right living and righteousness or morality are part of the one thing.”

Archdeacon Pierpoint was addressing a congregation at the service in St Michan’s Church of Ireland in Dublin attended by several members of the judiciary including the Chief Justice Mrs Justice Susan Denham. Dublin Lord Mayor Christy Burke was also present.

The Archdeacon said the law, although essential for the conduct of human affairs, has a “limited place in them”.

Law is there to protect the weak and at times we all need that protection, he said. When law enters the arena of morality, it nearly always runs into difficulties, he said.

“How far can sexual behaviour or same sex marriage or blasphemy or the right of women for personal autonomy be dealt with by the law, except in the limited sense of protecting the vulnerable?” he asked.

In his homily at a Mass at St Michan’s Roman Catholic Church, Halston Street, Dublin, the Papal Nuncio, Most Reverend Charles Brown, said law is “a vocation aimed at the achievement and maintenance of justice, that most elusive of qualities”.

Addressing a congregation including senior members of the Irish judiciary as well as visiting judges from England, Scotland and France, Monsignor Brown said justice means “making things right, giving each person what is due him or her”.

“It requires honesty and integrity and, not infrequently, courage.”

Noting this period marks 50 years since the Second Vatican Council, he said what was perhaps most innovative about Vatican II was its emphasis on the autonomy of the temporal or secular order, the fact that human society has its own standing, importance, values and principles.

Common life on Earth, if it is to be relatively harmonious and peaceful, “needs to be built upon recognition of this intrinsically ethical component”, he said.