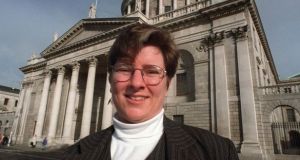 The Luxembourg-based Court of Justice of the European Union (CJEU) was hearing a referral of two questions from Ms Justice Aileen Donnelly of the Irish High Court. Photograph: Alan Betson

A Polish man currently in an Irish jail awaiting possible extradition should do more to show the Irish courts why he personally can not receive a fair trial if he is deported, lawyers for the Minister for Justice told the EU’s court on Friday.

Thirty-one-year-old Artur Celmer, referred to by the court as LM, is sought in Poland on drug-trafficking charges relating to offences in 2007.

His lawyer, Sean Guerin SC, insisted to the Court of Justice of the European Union (CJEU), that the Irish High Court was performing its duty in protecting EU law by asking if he could receive a fair trial. He rejected claims from Polish lawyers that the case was jeopardising the whole European Arrest Warrant system.

The Luxembourg-based court, in Minister for Justice v LM,was hearing a referral of two questions from Ms Justice Aileen Donnelly of the Irish High Court: whether Cermer could get a fair trial in Poland given what she said was the “systematic” erosion of the principles of the rule of law and the independence of the judiciary by the government, and what other, if any, evidence would be required to establish that.

The court’s advocate general will give his opinion, usually accepted by the court, on June 28th.

The well-attended hearing of the court’s Grande Chambre of 17 judges heard arguments from lawyers representing Spain, the Netherlands, Hungary, and Poland as well as the European Commission, Ireland and Mr Celmer (LM).

The case has been given “expedited” status by the court because it involves someone currently in custody and the Netherlands said it had suspended similar applications under the European Arrest Warrant (EAW) system pending a decision.

The hearing centred on arguments about the Aronyosi precedent, a case in which the CJEU had considered an extradition request to Hungary against the background of evidence that the accused would face prison conditions that did not meet human rights standards.

The court had set two tests for blocking the execution of EAWs, currently a near-automatic process - a generalised assessment by the national court that there was a systematic erosion of the rule of law in the country requesting the transfer, and that the court had examined and found that in the specific case the erosion was such as to mean that there was a strong risk the accused would therefore not get a fair trial.

Ireland (represented by Remy Farrell SC) and the Commission (Karen Banks, deputy head of its legal service) both argued that the court had a duty to fulfil both tests if it was to hold up an extradition. The second test had to be a “concrete inquiry” into the specifics of the case being considered.

The question, Mr Farrell said, was “not amenable to a black and white answer but depended on the specific facts of the case”. He rejected Polish claims that the High Court’s questions were based on “extreme absurdity”. But he said that a finding that only a generalised determination was necessary would lead to a suspension of the EAW system.

Ms Banks, responding to claims from Poland (represented by Boguslaw Majczyna, and Deputy Minister of Justice Lukasz Piebiak) that the government had already removed some of the judicial changes to which the EU objected, said that nothing has changed on the major concerns.

She said that it still remained the case that one third of the Supreme Court was being retired in July, that judges on the National Council of Judges were no longer elected by judges, and the minister for justice retained powers as head prosecutor in the disciplining of judges who could be asked to account for the content of their decisions.

And she defended the right of judges in national courts to consider such issues. “A court cannot ignore the evidence of a substantial threat to judicial independence,” Ms Banks said, noting that that had been the logic of the Aronyosi decision.

Mr Majczyna, supported by the Hungarians, contended that there was a mistaken presumption by the High Court and by the Commission that Poland is undermining judicial independence, which he denied.

The High Court had relied on a Commission “reasoned opinion”, its case against Poland in the Article 7 proceedings in the Council of Ministers, to make such assumptions. The proceedings could lead to the suspension of Polish voting rights but are currently the subject of talks with the Commission.

But, he argued, the Commission does not have the “competence” in the treaty to make a finding of “clear breach” of the rule of law. Only the Council could do that, he said, insisting that has not yet happened. There had been no establishment of a clear risk on which this case was based. “The commission is encroaching on the competences of other institutions,” he claimed.

He said that national courts did not have the right to question the rule-of-law standards in other member states.

Poland had also been denied its right to respond to the claims, Mr Majczyna said.

Mr Guerin argued that what was at stake was a fundamental value of the union and he entirely rejected Polish contentions that national courts had no right to carry out an assessment of rule-of-law standards in a member state to which they were being asked to extradite someone.

The protection in the union treaty’s Article 2 of such rights was “truly precious” he said, it embodied “the entire inheritance of European civilisation and democracy”. Common adherence of member states was the basis of the “mutual trust” in each others’ systems which underpinned the EWA.

He stressed, among other concerns, the fact that the Polish minister for justice has a role in the disciplining of judges.