Carrickmines fire: ‘This hasn’t hit the community yet’ 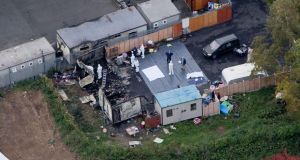 An aerial shot shows the extent of the damage at the halting site on Glenamuck Road, Carrickmines. Photograph: Tom Honan/Irish Mail on Sunday 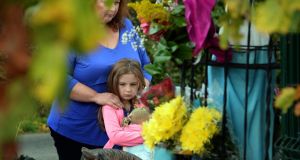 Fire brigades remained on the scene at the fatal fire at the Carrickmines halting site on Saturday for more than eight hours as crews fought to control the flames and retrieve all of those involved.

Ten people died and two children were in hospital, where one remained in a serious but stable condition last night.

The pictures of the scene told their own graphic tale, with abandoned tricycles and toys alongside the crumpled walls and mangled steel.

Three generations were involved; two families and at least 13 people.

Thomas and Sylvia Connors and their three children all died, along with Sylvia’s brother Willie Lynch, his partner Tara Gilbert and their two children Kelsey and Jodie. Willie Lynch’s brother is also believed to have died.

It was reported that they had been visiting the Connors – who lived on the site – from their home in Bray for a family celebration. Ms Gilbert was pregnant with the couple’s third child.

The victims’ bodies were removed from the site on Saturday evening, past the dozens of floral tributes that had been left by relatives and sympathisers seeking to offer support.

Emergency services had arrived on the scene within 10 minutes of the first call being received from a member of the public at 4.24am. Members of the Dublin Fire Brigade from Dún Laoghaire, Donnybrook and Nutgrove responded to the emergency.

Some family members were rescued from the fire, including Thomas Connors’s parents, Jim and Jo Connors, who have since been released from hospital. However, efforts to save their son, grandchildren and in-laws were unsuccessful.

Outside the halting site on Saturday afternoon, Dublin Fire Brigade assistant chief fire officer Denis Keeley described the “substantial and well-established” blaze that had confronted firefighters on their arrival.

Fire officer Gerry Stanley said: “We suspect at this early stage that the fire started in one unit and spread to the second. We’ve got one unit that’s fully involved in the fire and a second one that’s partially burned,” he said, indicating that the worst- affected structure was a permanent and prefabricated.

Located in the middle of Glenamuck Road, roughly halfway towards Kilternan from the M50 exit, the halting site stands directly beside the entrance to Wayside Celtic’s football grounds.

The site is thought to have opened in 2009, not long after the Connors family returned from the UK.

Aerial photographs show that the halting site has three large bays, interspersed between a number of smaller structures and caravans.

These housing units are split between two enclosures – a larger one encircled by a high steel fence, and a smaller square where the fire was thought to have started.

The steel fence was all that separated the prefab gutted by flames and a second structure that sustained significantly less damage.

About 20 people usually resided there, according to local accounts, and all were members of the extended Connors family.

The small halting facility was originally opened by Dún Laoghaire-Rathdown County Council as an emergency measure. Although plans to develop a new halting site along the same stretch of road have been in the offing for almost two years, no work has been carried out.

In a statement following Saturday’s tragedy, the council outlined that the site had running water and sewerage connections, toilet blocks, showers and electricity, and met fire, health and safety regulations.

It was fitted with fire extinguishers, fire blankets and a hydrant, which was used by emergency services on Saturday.

“When you look at the standard of the accommodation that was there, it looked to me like it was a building site,” he said.

“It was only when I saw the aerial shot that I got a good look at the way the two units were structured together, and one was just joined to the other at the back. We have to ask questions, and it then extends the question out to fire safety generally, in relation to these modular units that are being proposed. What materials are going into them, are they fire-resistant?”

After the initial shock at Saturday’s news, south Co Dublin’s Traveller community rallied to help those involved, with an emergency centre set up, counsellors made available and accommodation provided for the 14 people left homeless after the blaze.

Books of condolence were filled within hours in nearby Stepaside, according to Mr Curran, who spoke of a difficult few days ahead for local people.

The outpouring of grief was replicated on social media.

“Anyone who knew them knew they were all lovely people. Just living their lives and looking after their families like everyone else does. Rest in peace Thomas, Sylvia and their beautiful kids. Always a pleasure to have known you,” read a Facebook post from Hazel Cullen.

“My heart is broken in bits. My whole daddy’s side of the family is gone . . . There is no way of healing the pain that everyone is going through. I really am speechless,” wrote Mary Lynch.

A meeting of Dún Laoghaire- Rathdown County Council is scheduled to take place today. There are likely to be questions about how this tragedy could have unfolded on such a scale, and what preventative steps could have been put in place.