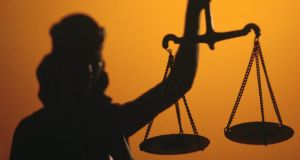 Paul Burns (31) tried to attack Edward Gibson while medical staff were battling to save his life, prosecutors claimed. Mr Gibson was rushed to Royal Victoria Hospital following a gun attack in the Divis area of Belfast on October 24th last year.

A murder victim was subjected to abuse and told he would be killed as he lay dying in a Belfast hospital, the High Court heard today. Paul Burns (31) tried to attack Edward Gibson while medical staff were battling to save his life, prosecutors claimed. Mr Gibson was rushed to Royal Victoria Hospital following a gun attack in the Divis area of the city on October 24 last year.

The 28-year-old father of one had been shot in the stomach and thigh in an alleyway at Clonfaddan Crescent. His killing is allegedly connected to a fight earlier the same day. Mr Burns, from the west of the city but of no fixed address, faces charges of disorderly behaviour and threats to kill over his behaviour at the hospital. During a failed application for bail, it was claimed he arrived with arm injuries as Mr Gibson was being treated in the accident and emergency resuscitation room.

Conor Maguire, prosecuting, claimed: “He told medical staff that he was looking for his cousin Edward Gibson and he began to pull back curtains to cubicles searching for him. “He pushed past medical staff in an attempt to attack Mr Gibson and shouted: ‘I’m going to f*cking kill you’.” It was alleged that Burns swore at the shooting victim again, accusing him of having committed a crime. He was ushered away, arrested and later transferred to the Ulster Hospital for treatment to his arm injuries. Mr Gibson was declared dead in the early hours of October 25th. Another man, 58-year-old Malachy Goodman, of Rockmore Road in Belfast, has been charged with his murder.

Mr Burns and Mr Gibson had allegedly been on opposing sides in a fight between rival factions on the day of the shooting, the court heard today.

According to the prosecutor, Mr Burns told police he had been drinking heavily that day, as well as taking cocaine and 50 diazepam pills. Defence barrister Michael Boyd described his client’s alleged behaviour in hospital as “absolutely disgraceful”. He claimed Mr Burns was not involved in the original fight, but was later attacked by the deceased and another man. The accused was knocked unconscious and stabbed twice in the arm before going to hospital himself, his lawyer said. “He has asked me to convey his shame and his sorrow to the court and to the members of staff and public who were present at the hospital when this happened,” Mr Boyd added. “At that particular stage he wasn’t aware Mr Gibson had been shot. It’s not a case where he knew this man was at death’s door.”

Refusing bail, Mr Justice Treacy warned that Mr Burns faces a substantial jail sentence if convicted. The judge added: “He’s alleged to have threatened to kill a dying man in the hospital. This is not a case in which the court could consider releasing this man.”