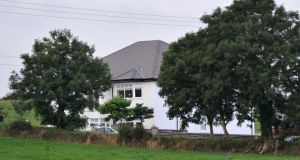 The house which was the scene of an attempted armed robbery in Glounthaune, Co Cork. Photograph: Daragh McSweeney/Provision

Gardaí were last night continuing to question five men arrested after armed officers foiled an attempted robbery of a businessman at his home in Glounthaune in east Cork on Sunday night.

Some 12 members of the Regional Support Unit teams from Cork and Limerick moved in as three members of the gang approached the home of chip van operator Pat Glavin about two kilometres from Glounthaune village at about 10.30pm on Sunday.

Gardaí discharged a double-blast stun grenade to disorientate the gang and they arrested two members of the group close to the house, but a third member of the gang managed to make good his escape in the darkness, fleeing across fields.

It is understood that officers had mounted a surveillance operation on Mr Glavin’s house after receiving intelligence that he was to be targeted by a group of Cork city criminals.

Several Garda units were on stand-by as part of the plan to thwart the robbery.

Twenty armed detectives
Gardaí evacuated Mr Glavin and his family from the home about 2pm on Sunday and members of the Regional Support Units moved into place at 5pm, lying in ditches and hiding in nearby fields as well as occupying the house in anticipation of a robbery.

Gardaí also mounted an outer cordon of up to 20 armed detectives some three to four miles back, monitoring possible escape routes through villages such as Knockraha, Glanmire and Carrigtwohill in east Cork as well as some routes back into Cork city.

The two men arrested at the scene, a 37 year old from Knocknaheeney on Cork’s north side and a 38 year old from Curraheen on Cork’s south side, were conveyed to Cobh Garda station for questioning about the attempted raid.

This carried out sweeps of the surrounding countryside using thermal imaging equipment to identify any possible fleeing suspects.

Just after 1am, officers stopped a car in Glanmire village which they suspected was the gang’s getaway car.

They arrested the two occupants, a 34-year-old man and a 33-year-old man, who were both from Ballincollig.

They then brought them to Midleton Garda station for questioning.

Escaped suspect
Gardaí continued with their search and, at about 3.20am, armed officers arrested a 44-year-old man at a house in Mayfield in the city whom they suspect was the ringleader of the gang and had managed to make his way to the house after fleeing from Glounthaune.

He was taken to Mayfield Garda station for questioning.

As with the other four men arrested, he was detained under section 50 of the Criminal Justice Act which allows gardaí to detain suspects involved in organised crime up to a maximum of seven days.

The 44 year old, who is from Togher, is known to gardaí.

Gardaí believe that the gang had been planning a robbery for a number of months.

However, it was only in recent weeks that they identified Mr Glavin, who is in his 50s and owns several chip vans, as the target.

Officers believe that the gang may have planned to carry out the raid on the bank holiday weekend but postponed it.