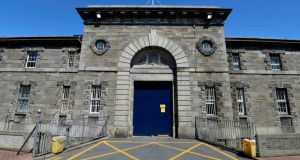 The Court of Criminal Appeal has doubled the four-and-a-half year sentence imposed on a man who slashed his ex-girlfriend’s face with a knife, tore skin from her eyelid and wrote the word “Aids” on a wardrobe in her blood.

During the sadistic attack, Imamboccus, who came to Ireland illegally and is the subject of a deportation order, threatened her with death, tried to cut a tattoo of his name off her hip and told her he would give her Aids before writing the word with her blood on a wardrobe door.

The victim woke “with a piercing pain to her cheek” to find Imamboccus sitting on top of her, cutting her face with a knife. Jadwiga Marek later told gardaí Imamboccus appeared sober “and had a grin on his face and seemed to be enjoying it”.

She twice tried to get away from him by pushing a bed against a door and locking herself in the bathroom, but Imamboccus forced his way into the rooms each time, telling her “I have not finished with you. You are going to die.”

In the bathroom, Imamboccus held her head under a tap of hot running water, tore the skin from her eyelid and watched it wash down the drain. He still had a blade in his hand and he held up the woman’s face, telling her to look in the mirror and saying, “Look at you Jadwiga, you are so ugly now.”

In May 2011, Judge Martin Nolan imposed a four-and-a-half-year sentence on Imamboccus, with a last address at Belvedere Place, Dublin 1, after he pleaded guilty at Dublin Circuit Court to intentionally or recklessly causing serious harm to Ms Marek at Loftus Court Apartments, Parnell Street on May 6th, 2010.

Mr Justice Nial Fennelly this morning said the case was one of “extraordinary seriousness” and involved a sadistic and cruel kind of violence. He said the court took the view that Judge Nolan “did not do justice to the awfulness of the crime” by using a sentence of eight years as a “starting point” before taking mitigating factors into account.

Mr Justice Fennelly said the appeal court was satisfied Judge Nolan committed an error in judgment and that the appropriate starting point should instead be a sentence of 12 years. He said that, having taken in to account mitigating factors such as Imamboccus’s plea of guilty and his previous good character, the court believed the 12-year sentence should be remitted down to one of nine years’ imprisonment.

Counsel for the State, Remy Farrell SC, had told the court the case was an unusual assault in that it took place over a prolonged period of time and involved aspects of “what could fairly be described as sadism”.

He said there were emotional as well as physical aspects in the assault and threats were made against the victim’s life for the purpose of heightening emotional distress. Mr Farrell submitted that the offence of causing serious harm could be split into categories of reckless and intentional assault, and the majority of cases that came before the court involved both aspects.

However, as this case was “extremely unusual” in that it involved express and direct intention, Mr Farrell submitted it should have been placed in the highest category of seriousness from the outset.

Mr Farrell said the trial judge fell into error by failing to identify the maximum penalty of life imprisonment open for causing serious harm, and by extension, failing to place the offence on the scale of seriousness. Mr Giollaíosa Ó Lideadha SC, for Imamboccus, told the court it would be “perfectly proper” to place the offence at a starting point higher than eight years but submitted that Judge Nolan fully took into account the fact the case was a serious assault.

He said the judge had regard to Imamboccus’s early plea of guilty, his co-operation, his lack of previous convictions and the fact that he was a foreign national facing imprisonment in an Irish jail.

Mr Ó Lideadha said Imamboccus also had a significant previous work history and was a model prisoner. Crucially, he said Imamboccus had reported the assault himself to gardaí. Mr Ó Lideadha said that, as the offence was a domestic violence case, albeit a “particularly horrific” one, the court should be conscious that “some victims of domestic violence are reluctant to make reports”.