Analysis: Dumping of bodies in canals usually sign of panic 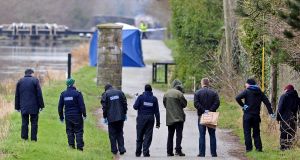 The discovery of a male torso in a suitcase in the waters of the Grand Canal, Co Kildare, was a gruesome but not unprecedented find.

This canal and the Royal Canal have both been used in the recent past by killers looking to dispose of the remains of their victims quickly or to frustrate Garda investigations.

Bodies not found immediately can reach such a state of decomposition that identifying the deceased or establishing the cause of death can prove an impossible or protracted exercise.

The waters will likely wash away some evidence such as body fluid, hair or even skin particles from remains or clothing that can link a victim or crime scene to a killer.

However, even in cases where a person’s head or hands are not recovered, DNA checks can be used to confirm identity.

A postmortem on even partial remains will establish an approximate time frame – of days, weeks or months – in which the deceased was killed.

Samples of DNA can then be taken from the family members of those people known to have gone missing around the same time, with crosschecking often confirming identification.

In the past, some victims whose body parts were found in the canals had not been reported missing. However, public appeals in which the person’s nationality, skin colour, approximate height and details of any clothing discovered with their remains has aided Garda inquiries.

One such victim was Farah Swaleh Noor, whose body parts were found floating in the Royal Canal near Croke Park, north Dublin, in March 2005.

A Kenyan national, he had been beaten and his body dismembered at a nearby house in Ballybough by the Mulhall sisters, Charlotte and Linda.

When gardaí revealed he was a black African and that a replica Ireland soccer jersey had been found where his partial remains were discovered, an associate came forward to supply his name.

His identity was soon confirmed and the investigation into his last known movements brought gardaí to the Mulhalls and a house where they lived and where he had been killed and dismembered. His head was never found.

In 2001 the remains of Romanian man, Adrian Bestea, were found stuffed into a suitcase in the Royal Canal in north Dublin.

It emerged his girlfriend had paid three Ukrainian men to attack him, apparently in revenge for what she said was the domestic violence she was subjected to.

The 21-year-old died during a protracted beating at a flat in Sandymount before his body was stuffed into the suitcase and taken on the bus to Drumcondra across the city and dumped in the canal.

It was found 10 days later by children playing in the area.

In an unrelated case the remains of Patrick Murray (19) from Ballyfermot and Darren Carey (20) from Kilmainham were found in the Grand Canal in 2000. They had both been shot and then dumped in the water.

No effort had been made to conceal the bodies and gardaí believe the dumping of the remains was designed to wash away forensic evidence and for expediency.