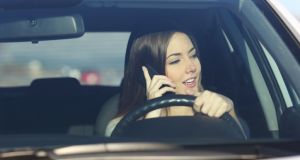 Almost all road users have seen a motorist using a hand-held mobile phone while driving this year, according to new research done on behalf of the Road Safety Authority (RSA).

The study examined the attitudes of Irish people in relation to road safety and enforcement of the law.

Only 1 per cent of people said they had never seen another driver using a mobile phone while driving.

Research showed nearly three-quarters of road users believe there are not enough gardaí enforcing traffic laws on roads across the State.

Just 2 per cent thought there were too many gardaí imposing traffic legislation while 73 per cent believed there were not enough.

More than 70 per cent of people surveyed said there were not enough gardaí enforcing mobile phone offences and drink driving limits.

For the first seven months of this year Gardaí issued more than 17,000 fines to drivers for mobile phone offences.

The number of people who said they have not passed through a Garda checkpoint in the previous six months has increased to 25 per cent, up 10 per from 2013.

According to the study, almost 40 per cent believe the level of enforcement of road traffic laws by the gardaí had decreased since January 2014.

Driving over the speed limit was the next most common illegal behaviour after using mobiles while driving, with 75 per cent of respondents observing it at least once a week. Sixty-six per cent noticed cases of dangerous driving weekly.

About 50 per cent of people said penalties imposed by courts and road safety TV advertisements were “very influential” in saving lives on Ireland’s roads.

The research was released to RTÉ under the Freedom of Information Act on Thursday.

In response as to why a FOI request was necessary to release the information to the public, a spokesman for the RSA said they had no comment.

“The RSA chose to bring the research results directly to the relevant authorities in order to achieve constructive engagement around the issues highlighted in the study and for those authorities to take action as a result of the findings,” he said.

Moyagh Murdock, chief executive of the RSA, said the number of gardaí in the Traffic Corps has reduced more than any other areas of enforcement.

“We would like to see this trend reversed,” he said.

“It is vital that the role and presence of the Traffic Corps is increased on our roads, so I urge this to be strongly considered in the training and allocation of new Gardaí.”

A spokesman for An Garda Síochana said road safety remained a priority.

He said 456 drivers were charged with driving while disqualified since the introduction of new legislation in June.

“An Garda Siochana are playing our part in terms of enforcement however drink driving, speeding and failing to wear seat belts continues to results in fatal and serious injury. All road users have a responsibility in making the roads safer,” he said.