Estate residents call for access to river to be closed 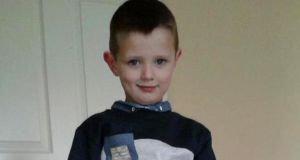 James Casey Butler (7) who has died in hospital after he slipped and fell into the Owencurra river near the Tir Cluain estate in Midleton, Co Cork, on Saturday night. Photograph: Provision 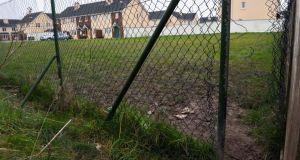 The gap in the estate fence through which James Casey Butler (7) passed before he slipped and fell into the Owencurra river at the Tir Cluain estate in Midleton, Co Cork. He died in hospital. Photograph: Daragh Mc Sweeney/Provision

A seven-year-old boy has died in hospital after falling into surging flood waters in Midleton, east Cork, at the weekend.

James Casey Butler from the Tir Cluain estate in Midleton died at Our Lady’s Hospital in Crumlin yesterday evening after being transferred there from Cork following his rescue from the Owenacurra river at around 6.45pm on Saturday evening.

He had been playing with three other boys on a green area in the estate on the Fermoy Road in the town when he gained entry to the riverbank through a gap in fencing and fell into the river and was swept almost 300 yards downstream in heavy floods.

Residents at the housing estate yesterday called for work to be carried out to close off access to the local river, saying there had been safety concerns recently.

Some of the boys playing with James raced to the nearby house of John Shanahan, who alerted the emergency services before a group of parents from the estate raced to the riverbank to try and find the missing boy.

Mr Shanahan’s brother-in-law, Roy Daly, was visiting at the time and he jumped into his car and drove towards the entrance to the estate where the river is crossed by a bridge.

“I just heard someone shout they had found him so I went down to the riverbank to help,” said Mr Daly.

Another local man, Damian Garde, had waded into the heavily flooded river up to his shoulders and a depth of nearly 1.5m to grab the boy and, together with Mr Daly, managed to get him to the riverbank.

The two men began CPR on the boy, who had been in the river for over 10 minutes.

They were joined by members of Midleton Fire Brigade as well as an off-duty paramedic in trying to resuscitate him before a HSE South ambulance took him to Cork University Hospital. Late on Saturday night, the boy was brought by ambulance to Cork Airport – because there is no helicopter landing facility at CUH – and he was airlifted by Irish Coastguard helicopter, Rescue 117, to Our Lady’s Children’s Hospital in Crumlin.

James’s parents, Edel Casey and Paul Butler, are understood to have travelled to Dublin and were maintaining a vigil by his bedside in the intensive care unit at Our Lady’s Hospital in Crumlin when he passed away yesterday evening around 8.30pm.

John Shanahan said everybody’s thoughts were with the Casey and Butler families following the tragedy.

“We had been hoping against hope but when the news came through, it was a very blunt and sad end to the day – our prayers are with his family.”

“There’s gap in the fence which is being opened by people wanting to go onto the riverbank. I guarantee you if you ask any parent in the estate, they will all say the river is their biggest worry here; something needs to be done to close it off for children,” she said.

Mr Shanahan said the tragedy could have been avoided with a proper barrier to prevent access to the river. “It’s lovely having a green here for the children to play on but having a hazard like the river nearby is terrible – there should be adequate protection here.”