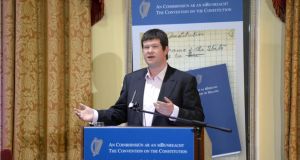 Eoin Murray of the National Women’s Council of Ireland, speaking at the Convention on the Constitution meeting to report recommendations to Houses of the Oireachtas on a review of the Dáil electoral system in Dublin today. Photograph: Dara Mac Donaill/The Irish Times

The constitutional convention has decided to review the size of Dáil constituencies, the number of TDs and non-parliamentary ministers at its next meeting in June.

The body also voted overwhelmingly to look into the creation of an Electoral Commission and measures to increase voter turnout.

After the first of two weekends devoted to reform of the Dáil electoral system, the convention’s 100 members were asked which of three types of electoral system they would like to examine in more detail.

Asked to rank possible changes to the existing proportional representation - single transferable vote (PR-STV) system, indicating which they would like to consider in more detail next month, members opted to look at the size of constituencies, the number of TDs, direct democracy and non-parliamentary ministers.

There was considerably less enthusiasm for non-geographic constituencies, replacing bye-elections, term limits for TDs and encouraging or discouraging independents.

At this weekend’s meeting in Malahide, north Dublin, the convention, which includes 33 politicians and 66 members of the public, heard from a number of academics and advocacy groups before narrowing down the agenda for next month’s session.

Prof Michael Marsh of Trinity College Dublin set out a number of changes that could be made without changing the constitution. These included altering the appearance of the ballot paper, for example by randomising names rather than listing them in alphabetic order; reforming the counting rules; and altering constituency sizes. The 1937 constitution specified a minimum of three seats per constituency, and they have varied between three and nine seats, but in recent decades the Government has required boundary commissions to stay within 3-5-seat guidelines.

Convention chairman Tom Arnold said he was pleased that the weekend was conducted in a “fair and transparent manner” which allowed all members to make their views known.

In an address to the convention, Eoin Murray of the National Women’s Council urged members to pick a system that maximised the representation of women and minority groups. The council recommended having fewer constituencies, more TDs per constituency and maintaining the single transferable vote alongside a national list system.

Mr Murray said any new system should protect small parties and should be compatible with gender quotas.

Representing Votes for Citizens Abroad, a campaign group drawn from members of London’s Irish community, Mary Hickman said the right to vote in Dáil elections should be extended to all first-generation Irish emigrants. She said this could be done through reserved constituencies for citizens abroad, following the practice in France and Italy.

“The immediate disenfranchisement of Irish citizens as soon as they leave the country is a source of anger and frustration,” Ms Hickman said. “Irish citizens who have had to leave have no say about the direction the country should take in the 21st century.”

1 The Sack of Balbriggan: The burning of a town that shocked the world 100 years ago
2 The FinCEN files: The billion dollar a month money trail
3 Brexit: Irish hauliers seek State help to bypass UK ‘land bridge’
4 Coronavirus: 396 more cases as public is urged to help protect ‘older and vulnerable’
5 Gardaí break up rave attended by 60 people at Dublin flat complex
Real news has value SUBSCRIBE