Will burning millions of Snickers and Mars bars save the brand?

Someone in Germany finds plastic in a Snickers bar, and Mars incinerates mountains of blameless confectionary. Overreaction or sensible response? 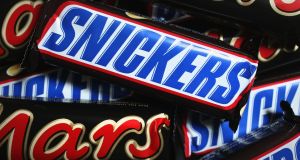 Mars recalled chocolate products in 55 countries after the discovery of plastic in a bar produced in a company plant in Holland. Photograph: Sean Gallup/Getty Images

This week millions of Mars, Snickers and Milky Ways were recalled after a customer came across a piece of red plastic in a bar bought in Germany. The plastic was traced to a Mars factory in the southern Dutch town of Veghel, where it was found that it had come from a protective cover used in the manufacturing process.

The discovery and its consequences are just the latest in a seemingly endless cycle of crises and recalls for high-profile products. Whether it’s Volkswagen cars being built to cheat emissions tests, faulty seat belts in millions of Toyota SUVs or Ikea lampshades causing injuries, these cycles follow a now familiar pattern.

If the brand doesn’t take drastic and immediate action, it can suffer deep and potentially irreversible damage to its reputation. So one tiny piece of plastic leads to the incineration of millions of blameless miniature chocolate bars. (The problem appears to have been confined to the “fun-size” products.)

For Mars, killing the problem as quickly and as visibly as possible becomes the priority, even if the risk to the public is statistically quite low.

“We cannot be sure that this plastic was only in that particular Snickers,” a spokeswoman for Mars said this week. “We do not want any products on the market that may not meet our quality requirements, so we decided to take them all back.”

The cost of the recall (estimated at more than €10 million) is far outweighed by the potential cost to Mars if the company had let the story spin out of control. These days that can happen pretty fast.

A rudimentary Google News search shows more than 700 stories have been published worldwide in the five days since the story broke. In the world of digital news, food-scare stories tap into a widespread anxiety about the food-processing industry. The disjunction between the marketing message of “quality” and the reality of mass production makes us all a bit queasy.

Product recalls have become a familiar part of our news agenda. Rarely a week goes by without word arriving of a flammable toy or spontaneously combusting household appliance being pulled from our shelves. Earlier this month Ikea asked customers around the world to return the popular Lock and Hyby glass ceiling lampshades after 224 reported instances of them breaking, causing injury to 11 people.

For the most part it’s a positive development: better consumer-protection laws and higher regulatory standards mean shoddy or dangerous goods are less likely to evade detection. And it’s hardly a bad thing that corporations have become hypersensitive to how the public perceives them.

In the US the Chipotle chain of Mexican restaurants offered free food to customers this week after suffering three months of bad publicity over an outbreak of E coli across its branches. The fear for the company is that it will suffer the same fate as the fast-food franchises McDonald’s and Taco Bell, which both fell into long-term decline following food-poisoning scandals.

But perspective can be lost when the media treats all these problems in the same shock-horror way. Are all these incidents symptomatic of the same types of failures? Or do they tell us more about the ways in which different industries try to manipulate us in different ways?

When it comes to recalls and scandals, the motor industry leads the way, unsurprisingly. Improvements in safety standards in recent decades may have contributed to saving many lives, but cars still kill people, and tiny design failures can have a statistically significant impact across millions of users.

It may be, though, that car recalls – such as Toyota’s decision this month to recall three million Rav4s because of a problem with its rear seat belts – are coming to be seen as just a natural part of the production cycle rather than the corporate disasters they’ve been portrayed as in the past.

Last year’s Volkswagen scandal was different. It revealed a willingness by major automobile manufacturers to commit fraud in order to evade the full cost of emission reductions. It also revealed the weakness of governments in the face of a powerful industry lobby group.

With much tougher emission targets now coming down the line, the scandal may have done us all a service by revealing how things really work behind the glossy marketing campaigns and noble mission statements.

The Mars bar is a rather different case. Since its invention in a lab in Slough in 1932, the chocolate-caramel-nougat block has held a particular place in the affections of the chocolate-buying mass public in this part of the world.

In its heyday it was surrounded by lesser imitators and competitors – Aztecs, Topics and others – but it remained the gold standard. That apocryphal (and apparently untrue) story about Mick Jagger and Marianne Faithful wouldn’t have sounded the same without a Mars bar. And would anyone be entertained by the notion of a deep-fried Snickers?

Now smaller and re-engineered to appeal to a modern public that doesn’t like its sweets too chewy, the bar is struggling to hold its own in a crowded junk-food market. On the horizon is the threat of a sugar tax, reflecting increasing public concern about obesity and other health problems.

That classic “A Mars a day helps you work, rest and play” jingle now sounds as antiquated as “More doctors smoke Camel than any other cigarette”. All the more reason, then, for Mars to do everything in its power to stamp out this controversy as quickly as possible.