The best policy: answers to your questions about health insurance

Health insurers have ways of ensuring a robust profit margin, often through confusing pricing plans. Learn to navigate these and you could save a lot of money 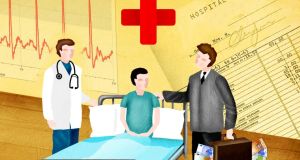 Health insurance: more than 500,000 people will be renewing their cover in the weeks ahead. Illustration: Thinkstock

Why is health insurance back in the news?
It is rarely out of the headlines, and it is not hard to see why. More than 500,000 people will be renewing their cover in the weeks ahead and many will be wondering how they are going to pay the price after successive increases by the four providers in recent years. Some policies have gone up by more than 70 per cent in the

past four years, adding an extra €1,000 to many people’s annual bills. Then there are the tax changes announced by the Minister for Finance, Michael Noonan, in his last budget, when he cut the relief available to those with health insurance in one stroke, adding more than €500 per year on to the cost of some fairly standard policies.

What kind of impact are the price increases having?
A big one. Many are surrendering policies. According to the sector’s regulator, the Health Insurance Authority, two million people were insured at the end of September, a fall of 62,000 or 3.2 per cent in a year. Most worryingly, the number of people aged 18-29 with health insurance fell from 241,222 to 217,588, a decline of 10 per cent. Young, healthy people allow the costs for older, sicker people to be controlled, which is known as intergenerational solidarity. If the young leave the market, that falls apart.

Can I save a lot by switching?
Yes you can. Health insurance expert Dermot Goode is very clear on this: he says not switching costs you money and almost everyone who is on a bad-value policy can save themselves hundreds of euro a year by shopping around. Those with gold-plated policies can save even more. Switching from what used to be known as VHI plan E to the current equivalent of VHI plan D could knock more than €1,500 off the cost of your annual premiums, and all you lose is access to private rooms in high-tech hospitals such as the Blackrock Clinic and the Mater Private. Frequently, even that doesn’t matter. The Blackrock Clinic, for instance, has all but scrapped its semi-private rooms so the second from top-tier plan gives you much the same level of cover but at a significant discount.

I have never shopped around for health insurance, so why should I start now?
If you have been on the same plan for more than three years you are probably over-insured, says Goode, and “if every member of the family is on the same level of cover then you are wasting money”.

But switching is complicated, right?
It can be. There are more than 275 separate health insurance plans on the market. By the end of the year, there will be more than 300.

Why so many?
Why indeed. The insurers say they are constantly rolling out new plans in response to consumer demand, but the reality is quite different. The HIA said in a report published before Christmas that the companies are adopting strategies to segment and select profitable business by creating differential pricing for targeted groups.

Sorry, what?
Companies want to attract younger, healthier people as well as locking big companies into deals. So they develop plans specifically for both groups. The young are attracted by cheap policies that don’t offer cover for ailments likely to afflict only an older cohort. Then the price of policies offering broader cover are hiked. Insurance companies also offer discounts to corporate clients, but would rather not let you have them. But under legislation all plans have to be made available to everyone. So what do the insurers do? They bring out new plans with confusing names, which they sell to corporates while leaving you in the dark. Sneaky.

So, what kind of deals are out there?
Goode is the country’s foremost expert on health insurance, and his knowledge of pricing is encyclopaedic. He suggests a family with two adults and two children could look at VHI’s One Plan Family. The children’s policies are currently available at half price, so the cost is €1,006 per adult, while children cost €131. Laya’s Essential Connect Family, meanwhile, costs €800 per adult and €150 per child.

“Both of these are very good plans,” he says. Glo Health’s Better plan costs €990 per adult plus €260 per child, but kids under three are free while three-year-olds get a 50 per cent discount. The company is also offering one month free to those who renew or sign up in January, which amounts to an 8.5 per cent discount.

With Aviva, Goode suggests putting different people in the family on different plans. Under its Family Focus policy, children aged five to 17 cost €150, while adults on its Family Value Plan cost €931.

Mixing plans and policies? Is that allowed?
Yes, you can mix it up as much as you want. There is nothing to say all family members have to be on the same plan or even with the same provider.

It sounds complicated. And I don’t want people asking me questions about my health.
Switching health insurer is very simple. Your new provider can only ask you three questions: Who are you currently insured with? What plan are you on? And how long have you been on that plan? It doesn’t matter if you’re planning to have a double hip replacement tomorrow, you can switch from insurer A to insurer B today, and insurer B becomes liable for the cost of the procedure.

VHI and I trust it. I have been insured with it for years?
While loyalty is to be commended it’s not always to be recommended. All the companies – from

VHI to the newest kid on the block, Glo Healthcare – are equally safe. Even if a company were to disappear overnight, all outstanding costs would be covered and you could switch to an alternative without any loss of cover.

How can I identify the best plans for me?
The Health Insurance Authority website hia.ie should be the first stop for most people. It has details of every plan on the market and a comparison tool that lets you see how your existing plan stacks up against other policies. Brokers are also worth considering. Goode’s website healthinsurancesavings.ie has a good price comparison tool, while many insurance brokers now have some expertise in the area and offer an advice service to existing clients at no cost. Of course, you should also ask your insurance company for information.

But what should I ask them?
Make sure your questions are very specific. Your calls will be recorded, so if they don’t tell you the truth it is their head on the block. A good starting point is: “Have you any plans across your entire range – including your corporate plans – which are equivalent to the plan I am on and how much do they cost?”

You should also ask what cover you lose by switching. The key thing is to put the onus on them to explain everything. Do not allow them to fob you off with some line about sending you a brochure in the post for approval. Then the onus falls to you to read the brochure. If you don’t understand something or if it is even vaguely unclear, make them explain it again. And again. For as long as it takes.

What is the story with excesses?
“Anyone who is struggling to cover the cost of their current plan needs to look at excesses,” says Goode. If you take on an excess on inpatient care in private hospitals and are prepared to pay a €2,000 shortfall for certain orthopaedic procedures, the cost of a policy can fall from more than €1,400 to about €800 a year.

“If you are in reasonably good health and can cut the cost of your cover by €600 by taking on some excesses, then you should look at that, but if you are in poor health or have a pre-existing condition, then taking on new excesses to save money is not something I would recommend.”

Now, back to the corporate plans. How can I get one?
This used to be a way to make major savings. Health insurance companies have since become more adept at cutting off some consumers from these savings, but there are still ways to cut costs going down this route.

“Companies are always going to give the best deals to big corporate clients so consumers should always watch what is going on in that space,” says Goode.

He cites a number of examples. Laya’s Health Manager Plan costs €3,107 while its Company Care Premium plan costs €2,087. The level of cover offered by both plans is broadly similar. But there are newer plans offered by the company which are even better value for money. Laya’s Total Health Select costs €1,411. It is, if anything, slightly better than its Health Manager plan buts costs half the price and represents very, very good value for money.

I am on Plan B. What about me?
There was a time when there were only five policies – VHI plans’s A to E – and most of us were on B. Many older people have stuck with this plan or moved to what was known as Plan B Options – now called Health Plus Access and Health Plus Extra. Health Plus Extra costs €2,096 for an adult.

Dropping back to Health Plus Access will save about €400 but you lose the cardiac cover in the high-tech hospitals, while Health Plus with an excess costs €1,458. The excess per hospital visit is €75, so you would need to make at least eight trips before taking on the excess would start to cost you money. Meanwhile, Laya’s Healthwise Plus without excess costs €1,167 and is the very same.