Members will have out of hours access to books 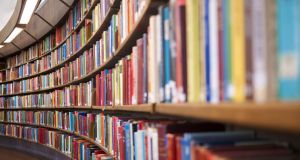 The new system, while relying to a great extent on the good behaviour of users, will be supported by technology

A great and solemn trust is being placed in the Irish people. From next year, citizens will, for the first time in the history of the State, be able to borrow a book from a public library, without a librarian present.

Members of the public will be able to access their library outside the normal opening hours, without a member of staff present, and check books out, under the open libraries initiative from the Department of the Environment.

The new system, while relying to a great extent on the good behaviour of users, will be supported by technology.

Under the pilot scheme, selected library buildings will be fitted with automatic doors. Users will gain access to the library by using their membership card and a pin number. They will be tracked as they move through the building by both prominent and discreet security cameras. Radio-frequency identification tags will be attached to books, which will have to be scanned prior to removal.

Monitored systems
Monitored alarm systems, loudspeaker warnings, and other surveillance technology will be in operation. Staff areas will be locked and access by children will be restricted.

Eager readers – not put off by this level of high-tech security – will, in addition to self-service borrowing and returning of books, be able to use the internet on library PCs or wi-fi using their own devices, and print, photocopy, study, attend community activities and meetings or just “browse”, the department says.

“Library staff in other countries in which open libraries operate, including Denmark, Sweden, Norway and Taiwan, report extremely positive experiences and that despite initial apprehension, very few disturbances occurred; in fact those which did occur were of a minor nature.

“It was also noted in Denmark that fewer incidences occur during the extended hours than during the traditional opening hours,” a spokesman for the department said.