Pricewatch: How Ireland falls down on Fairtrade 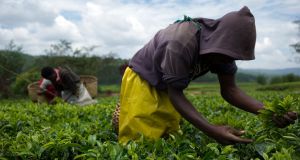 In the small towns and villages around the Sorwathe tea plantation, 90 minutes from the Rwandan capital of Kigali, the positive impact of Fairtrade is impossible to miss. The plantation, which supplies Bewley’s with some of its tea, is the only certified Fairtrade tea producer in Rwanda, and the money raised through the initiative is used for preschools, water-purification projects, hospitals and computer labs.

Put simply, Fairtrade makes lives there better. And it does so on the cheap. Companies from wealthy countries such as ours pay more to the farmers for the product, but that extra cost is minimal, whereas the impact of the few dollars more for the producers is massive. Everyone wins.

“Generally speaking there is a lot of support for what we do, particularly from consumers, but there is also fear from some companies that we will dilute iconic brands. I don’t think we do that. You just have to look at our work with Kit Kat and Cadbury. They are supportive and it works for them and us.”

He believes big companies understand that “in a competitive market they have to secure their supply base and they need to establish good relationships with the producers and the suppliers”.

But is there a danger that working with multinational companies such as Nestlé compromises the integrity of the Fairtrade ideal? After all, such companies are set up to make money for shareholders, so surely altruism rarely comes into it for them?

Gaynor does not agree. “This is not meant to be about living an alternative lifestyle. It is about having an impact where it is most needed. Businesses are buying in, and we are out to change things and we do change things. We have moved from the margins into the mainstream.”

The fruit has come to symbolise “exploitation and rough justice”, says Gaynor. “They have always been a very highly politicised commodity and represented the colonial relationships that existed.”

It also happens to be one of the most profitable goods sold by retailers and, because bananas are not very highly branded, theoretically at least it is an easier market to break into. Lyons and Barry’s have 80 per cent of the Irish tea market, and people are very loyal to one or the other, which makes it harder for Fairtrade to make its presence felt.

It characterises the banana chain as an hour glass. There are large numbers of farmers and workers in producing countries selling to a few international traders and supermarkets in the middle, who in turn sell to huge number of consumers. This market concentration can create a strong downward pressure on prices and lead to large-scale negative effects, including unsustainable living and working conditions for small farmers, worsening health and environmental pollution linked to the industrialisation of production.

Fairtrade sets itself up as an alternative model and provides some simple solutions to these negative effects, ensuring a fair price to producers, decent working conditions and benefits for workers and improved environmental practices in banana production.

There is a problem, however. Irish retailers are not buying in with the conviction seen in other countries. About 10 per cent of the bananas on the Irish market are Fairtrade-certified, compared with more than 50 per cent in Switzerland.

“I think Irish people want more Fairtrade products on their shelves,” Gaynor says. “If you look at the statistics over the last 20 years, Ireland has a very high awareness of the brand. And we also have one of the highest per-capita levels of donation to organisations supporting Fairtrade and ethical initiatives. And we have pretty high consumer spending in the area. But most of the spending is [outside the] home, in coffee shops such as Insomnia and Bewley’s. The only area we seem to have fallen down in is the retail space. Maybe that is a failing on our part, or maybe our retailers are failing their consumers.”

“But that is a chicken-and-egg situation, isn’t it?” says Gaynor. “In Co-Op and in Sainsbury’s in Northern Ireland, they have 100 per cent Fairtrade bananas, and people buy them. Retailers should not have the right to outsource responsibility.”

He says it is hard to put an exact number on the price difference between Fairtrade and non-Fairtrade bananas because prices paid in different countries at different times of the year vary.

But a rule of thumb would suggest that the difference in price might be no more than €2 per box. “There are 100 bananas in such a box, so a single Fairtrade banana might work out at two cent dearer than an alternative and could be even less than that.”

Gaynor is concerned – angry might be a better word – about Irish retailers not doing enough.

“Our numbers have been growing every year for 20 years. Fairtrade sales nearly doubled during the recession. If growth is not going to slow down, when will the retailers realise that there is a positive trend and one they can benefit from, one they can make money from?”

He commends both Lidl and Marks & Spencer for doing more than their rivals. M&S has “an enormous basket of Fairtrade goods on offer” – 48 per cent of the bananas it sells come under that umbrella – but its market share is much lower than the biggest players. Lidl has about 9 per cent of the Irish grocery market but sells some 40 per cent of the total Fairtrade bananas.

“If the others showed as much commitment it would make a huge difference to the movement,” he says. “Can we not expect retailers in the Republic to be as ethically minded as retailers operating in the United Kingdom?”