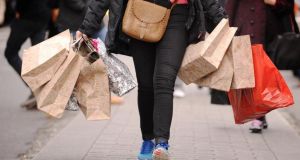 The Northern Ireland Independent Retail Trades Association said nearly two-thirds of businesses which applied for bank credit were successful despite a difficult trading climate over the past year. Photograph: Dominic Lipinski/PA Wire

The North’s largest companies have seen their combined turnover rise but have suffered a small slip in profitability.

A survey carried out by credit checking specialists Dun & Bradstreet and produced for Ulster Business magazine shows that turnover for the 100 top companies had tipped the £20 billion (€23.3bn) mark thanks to increased sales in the 12 months to April 2012. The previous year’s equivalent figure was £19.1 billion.

However, the results also point to a drop in profitability, down one point to 3 per cent, which is being blamed on a difficult trading climate.

Poultry processor Moy Park remains the largest trader with sales of more than £1 billion and profits of £24 million.

Agri-food companies account for nearly a fifth of the top 100 companies. “It is great to see agri-food businesses listed so prominently, demonstrating the importance of this sector to the local economy,” said Moy Park chief Nigel Dunlop.

Small retail businesses in the North, meanwhile, are finding it easier to obtain bank credit, a representative body has reported. The Northern Ireland Independent Retail Trades Association said that nearly two-thirds of businesses which applied for bank credit were successful despite a difficult trading climate over the past year.

Association chief executive Glyn Roberts said: “Overall it appears from our survey of independent retailers the banking sector is making progress in service provision. However banks still have some way to go in this area as 35 per cent were turned down for finance.”

The results were published following a consultation of some 100 independent traders across Northern Ireland and will form the basis of a submission to the Northern Ireland Affairs Committee which is examining banking services.

Mr Roberts said: “The banking sector overall will be happy with this figure and it demonstrates that they have responded to pressure from our members and government to improve.”