Luas Strike: ‘I’ll have to invest in a good pair of walking boots’

Delays in Dublin: ‘There are elderly people trying to get on the bus and they just can’t get on’ 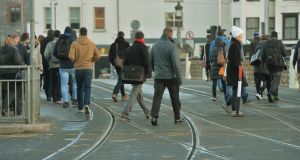 Hundreds of disgruntled commuters gathered in the bitter cold by bus stops outside Heuston Station in Dublin early on Thursday morning after Luas staff called a 48-hour strike to the service.

Teresa Flood, who had just arrived into Heuston from Newbridge, was piling on layers of clothing as she prepared to walk the 25 minutes to work.

“I did know about it (the strike) but there aren’t enough buses,” says Ms Flood who usually takes the bus to work near George’s Street. She was unable to get onto a bus on Thursday morning due to the crowds outside the station.

“There are elderly people trying to get on the bus as well and they just can’t get on. I just hope it stays dry tomorrow, I’ll have to invest in a good pair of walking boots. I asked the bus inspector ‘where’s the 90 bus’ and he said ‘I’m sorry love, we don’t have enough buses this morning’.

“It’s not fair for them I suppose, but I thought they would have planned some extra buses for this morning,” she said before setting off at a brisk pace towards the city centre.

Stephanie O’Sullivan left Newbridge a half hour early to ensure she got to work on time. “If the strike was about conditions that the employer wasn’t adhering to then I would support it, but in this case I don’t,” she said.

Standing beside her, Danielle Curtain from Kildare has decided to walk from the IFSC to Heuston on Thursday evening to catch her train home.

“I’m off tomorrow but next week it will be a bit of a problem. The journey is long enough without adding to it when commuting from Kildare.”

Carina Fitzpatrick, who usually takes the bus to work, said she is frustrated by the lack of extra bus service.

“I think it’s unfair. The tax payer pays for this facility. People commute and why do they punish the commuter who is paying of the service. Isn’t there any other way that they can negotiate?

“The buses are not a scheduled service. The buses are totally erratic. Today’s going to be a pretty awful day all around for everybody. It will be more chaotic this evening. I do believe the Luas drivers do a very good job, I do believe they deserve a pay rise, I’m not entirely sure they’re going the best way about it,” she said.

Cian O’Grady who has travelled from Ballinasloe just hopes the rain holds off on Friday morning. He usually takes the Luas to college near Connolly Station.“At least it’s not raining right now,” he says as he reaches into his pocket to pay for a bus ticket. “It’ll take me an extra hour to get home now this evening. The buses will be so busy.”

Both lines of Dublin’s Luas light-rail system will remain closed on Thursday and Friday, affecting more than 90,000 commuters in the capital.

Normal service will resume at 6.30am on Saturday, although there is another stoppage planned for next Thursday and Friday.