Lidl has become a stealthy, unglamorous agent of change

The budget retailer has made basic shopping fashionable and modern 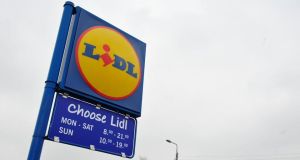 “Lidl has brought the show-and-tell phenomenon to our shopping, and made cheapness a virtue as well as a necessity.” Photograph: Aidan Crawley

The terrible news that Burgundy vineyards in the Côte de Beaune region were devastated by storms last week brought only one response from some of us: will this disaster mean less burgundy in Lidl?

Is burgundy going to go the way of the tinned mushrooms (completely vanished from the shelves, and quite recently) and that great asparagus that used to come in jars (gone for years but not forgotten)?

The Côte de Beaune was swept by freak hailstorms, and people watched the weather “pummelling grapes, tearing leaves from the vines and flooding the vineyards”, according to the Financial Times. The hailstones were the size of ping-pong balls, apparently. Still, all some of us could see were gaps on the shelves in Lidl’s wine section, which is almost always situated near the newspapers and the firelighters (an unflattering pairing in the view of many in the media).

This is globalisation, I suppose. I’m not 100 per cent sure that I know precisely what burgundy is, but when I visualise a shortage of it the scene is played out, horribly, in Lidl.

But then you have to remember that the wine shelves of Lidl frequently look pretty patchy even when there isn’t a world shortage on the horizon. First of all the stuff comes in sporadically. And then the good stuff is swept up frantically. People drive from store to store to stockpile good wine – and good beer.

Emergency
Like many consumer responses to shopping and shortages, it’s an emotional thing. In shopping now it’s always an emergency; it’s always life during wartime. The retailers can only follow this sort of irrationality at a distance, with clipboards. But they know that it is real.

Shopping is fraught with feeling. In its clunky way Lidl understands this. Who else is going to come up with a washing up liquid called W5 Sensitive?

Last week we got our own branch of Lidl in our Dublin village and to tell the truth, and to quote Prince William in another connection, we couldn’t be happier. We were knee-deep in flash restaurants; it was cheap groceries that we completely lacked . And those peeled red peppers in jars. Now we never need to go anywhere again.

You can talk about your 1913 Lockout and your Vatican II but, like television and the motorcar, Lidl is a stealthy bringer of change.

It is unglamorous – my God, is there anywhere less glamorous than Lidl? – and does not have any catchy slogans. Its unspoken slogan at the moment seems to be: “Doughnut peaches for the masses”, which can only be a good thing, although it’s quite difficult to say. Lidl’s own language is reassuringly strange. Who could resist a honey called Marlene? Its label declares it to be “a blend of EC and non-EC honeys”, a statement carefully designed to mean nothing.

How has Lidl changed Ireland? Let us count the ways. We’re going to leave out things like those spooky vacuum-sealed lobsters that appear around Christmas. And we’re also going to leave out the promiscuous pleasure of the five excellent and extraordinarily cheap toothbrushes, all different colours, in one pack.

It is an absolute certainty that Lidl brought the affordable wetsuit to a country surrounded by blood-chilling seas, and is therefore probably responsible for the surge in popularity of surfing here (this is my cousin’s theory and a good one). During your normal Irish summer Lidl wetsuits are the only reason that there are adults in the water at all.

It has brought cheap cut flowers into Irish houses throughout the winter – ecologically unsound but very cheering.

Its vegetables are cheap and good – not always the case in Irish supermarkets previously or even now.

Lidl has made basic shopping fashionable – more than fashionable, it has made it modern. You are not offered a great variety of choice in Lidl or Aldi; it is a pretty straightforward shopping experience. It is this virtue which has brought in the male shoppers. For years men have suspected that women were over-complicating the family shop – and they could have been right about that – and secretly thought they could do a whole lot better themselves.

On the cold day in hell on which the supermarkets operating in Ireland eventually share their information with the public which pays their salaries we may learn whether there are more male shoppers in Lidl and Aldi than in the other Irish supermarkets.

Public pleasure
Lidl has certainly brought the show-and-tell phenomenon to our shopping, and made cheapness a virtue as well as a necessity. Getting bargains or weird things – or weird things at a bargain price – in Lidl or Aldi is a public pleasure, to be boasted about by men – and women – who for years could not have unlocked a shopping trolley if they’d tried.

As you go round Lidl, guiltily trying to balance all the imports with some Irish goods, it’s easy to forget what it was like here before the German chains arrived. Now they’re here to stay, thank God.