Edward Laurence Keegan, an advertising clerk, was shot while fighting in the Rising 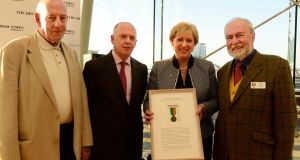 The Irish Times has bought at auction the 1916 medal of a former employee, Edward Laurence Keegan, who was dismissed from his job in 1916 after participating in the Easter Rising.

Keegan, who worked as a clerk in the advertising department, was also a member of the Irish Volunteers.

On Easter Monday 1916, he was shot in the lung while fighting with the South Dublin Union Garrison, under the command of Éamonn Ceannt. He was a member of the 4th Battalion of the Dublin Brigade.

He remained in hospital until August of that year, recovering from his injuries. A century ago The Irish Times largely reflected a unionist perspective, and Keegan was dismissed from employment.

His medal was unveiled at an event in The Irish Times yesterday alongside the launch of Was It For This?, edited by Ronan McGreevy, a collection of articles on the Rising largely sourced from the newspaper’s archives.

Keegan was also a part-time actor, who had performed at the Abbey. WB Yeats, in whose plays he had acted, offered him a full-time acting role at the Abbey, but Keegan refused it.

According to the academic and literary critic Declan Kiberd, a great-nephew of Keegan, his great-uncle turned down the Abbey job because he considered The Irish Times offered him a more secure future.

In 1941, Keegan was posthumously awarded the Casualty Medal, given by the government to those who had fought during the Rising.

Keegan was born in Dublin in 1879 and died in 1938. His funeral Mass was celebrated by Fr Aloysius Travers, who administered the Last Rites to both Patrick Pearse and James Connolly.

The medal was accepted on his behalf by his wife, Emily.

In January, Keegan’s medal surfaced at an auction in New York. It was being offered by Spink auction house, which specialises in medals, with a guide price of $3,000-$4,000.

After consultation with family members, The Irish Times bought the medal, and it was duly returned to Ireland.

Edward Laurence Keegan is buried in Glasnevin Cemetery. The medal is now on view in the foyer of The Irish Times offices.

Speaking at its unveiling and the launch of Was It For This?, Kevin O’Sullivan, the editor of The Irish Times, remarked upon “the incontrovertible evidence of The Irish Times’ role as the home for challenging viewpoints and analysis, consistently over 100 years since 1916 – including the airing of views confronting its not altogether happy role in those immediate events surrounding the Rising”.

He said this did not constitute a “legacy of evasiveness” as had been suggested in some social media circles recently.

“We became the cauldron of conflicted narratives throughout the 100 years of our State’s history.”

Minister for Arts Heather Humphreys also attended the launch. She said the book was a valuable contribution to the commemorations addressing some of the “most sensitive and difficult issues” of the past century.

Irish Times journalist Ronan McGreevy said: “There is no book like this out there. The other books are about what happened in the Easter Rising but this is about what it means.”