I can see clearly now: optometry put to the test

Competition is healthy in the profession, but where can you find the best value for money and should you pay for all those extras? 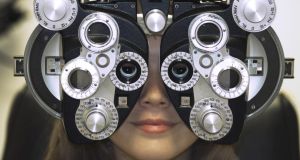 See here: eye exams can pick up on general health issues such as diabetes, MS or brain tumours. Photograph: Getty

All professions are conspiracies against the laity, said George Bernard Shaw. With that in mind, just how do you know your optician is telling the truth, and how can you get value for money?

A 2006 report from the Competition Authority said the “optometry profession in Ireland is [one] where competition is generally working well”.

There are about 700 practising optometrists in Ireland. The major corporate opticians – Optical Express, Specsavers, Vision Express and Tesco – control more than the half the market.

Optometrist? Optician? What’s the difference?
“Optician” is used by the general public as shorthand, but there are differences. An optometrist can test eyes and issue prescriptions, but a dispensing optician can only issue prescriptions. Dispensing opticians help customers choose the right glasses and can advise on frames and lenses. Their aim is to encourage you to buy.

What should I expect from an eye test?
A typical consultation should last 20-30 minutes, says Declan Hovenden, manager of the Optometry Centre in DIT, which runs Ireland’s only optometry course. “The aim is to bring each patient as close as possible to 20:20 [optimal] vision. The test usually starts with a discussion around optical health and general health history, lifestyle, hobbies and work. Today, the amount of time spent on computers is also a big consideration.”

If your test takes only 10-15 minutes, this should raise a red flag. It is much more than just an eye test. “A typical eye exam should also involve a discussion of family history and general health, which can have a bearing on the eyes,” Hovenden explains. This works both ways: an eye exam can pick up health issues, such as diabetes, neurological disease (including multiple sclerosis), hypertension, cholesterol problems and even brain lesions or tumours.

The optometrist should also assess your binocular vision. A glaucoma test should be carried out on anybody aged 40 and over, and possibly on younger patients too, says Hovenden. All eye exams, including free ones, should be comprehensive, says Peter Coleman of the Association of Optometrists Ireland (AOI).

How much should an eye test cost?
Prices vary wildly. A survey carried out by the National Consumer Agency in 2011 found that the national average price for a standard eye exam was €32, with a low of €20 in Donegal and a high of €45 in Galway city. The AOI estimates that about 80 per cent of adults are entitled to a free two-yearly eye exam under their medical card or PRSI contributions. Free or discounted eye exams are common, but practices are not generally doing it out of kindness: they want you to buy their glasses.

Although this is all perfectly legal, some independent optometrists have raised eyebrows about certain practices. In particular, it is not a “free” eye exam if the patient is urged to make a claim on their medical card or PRSI contributions. And patients are always entitled to a copy of their prescription, regardless of any disclaimers to the contrary. Remember: you are not obliged to buy your glasses or contacts from the company that gave you the eye test.

Free eye tests are available at the National Optometry Centre in DIT, Kevin Street, a fully functioning eyecare facility that can dispense glasses and contact lenses. Tests are carried out, under supervision, by optometry students, so the process can take up to two hours. Eyezone, an association of independent optometrists, also offers occasional free eye tests for children.

Where’s the best value on frames and lenses?
Making comparisons is difficult. There are hundreds, if not thousands, of brands and styles available, and no practitioner (except those in the same chain) will stock the same brands and styles. There can be good value online, but customers will miss out on the advice of the dispensing optician.

Time for a new prescription – is there any way I can save money on new glasses?
Yes. Don’t buy new frames. A new prescription does not require new glasses. In most cases, your optometrist should be able to fit the new lenses to your existing frames – but many don’t advertise this, as they stand to lose money on sales. If they refuse, take your business elsewhere.

When should I go for a thinner lens?
Whether long- or short-sighted, higher prescriptions will generally have a thicker lens, depending on the frame. Thinner lenses are, primarily, for cosmetic purposes, and cost more.

Very often, choosing a smaller frame means the lens thickness will be reduced. If your prescription is low, it makes less sense to pay for thinner lenses.

Paul Connolly, an independent optician in Cavan town, says. “Up to plus- or minus-three on the scale on long- or short-sightedness, the lens is not particularly thick,” he advises. “Instead of paying up to three times the price, a smaller frame can reduce the appearance of a thick lens.”

Should I go for anti-reflection coatings?
The coating aims to reduce glare and reflection, but it is costly (€45 at Specsavers). It can be good for thicker lenses, for people who work at computers or drive at night. However, Connolly suggests that sometimes such extras are oversold. “Their value is questionable if the glasses are mainly used for reading or by students in the classroom,” he says. The coating is also more susceptible to scratches.

Off-the-shelf reading glasses are dirt cheap. Any reason I shouldn’t buy them?
“There is nothing wrong with them when they are appropriate,” says Coleman. “However, the risk is that a person may postpone having an eye examination and may therefore avoid a professional assessment of the causes of their need to use glasses. For many people, they are used as spares in addition to their prescription glasses.” A study in consumer magazine Which? highlighted that “ready readers” may lack accuracy, and that lens quality was poorer than in prescription glasses.

I’m not happy with my optometrist. What can I do?
Complain. These are commercial practices and people who need glasses or contacts will probably need them for life, so they won’t want to lose your business. Or get a second opinion. The regulatory body for the industry – the Opticians Board – has limited powers, but regulation will soon pass to a new Health and Social Care Professions Council, Coru. Optometrist practices are not obliged to display a complaints procedure. The AOI provides a confidential mediation service but does not have any statutory powers.