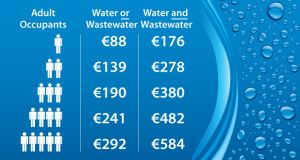 Government funding and free allowances mean water services for children will remain free at least until 2016.

Most Irish families will have to pay at least 20 per cent more for water than the Government claimed less than three months ago with the average cost for a household of two adults and two children coming in at €278, according to figures released this afternoon.

When the then minister for the environment Phil Hogan announced details of how Irish Water would function in May he insisted the average household would pay €240 a year.

However, details of the pricing structure published by the Commission for Energy Regulation today said the cost for a two adult household would be at least €38 per annum higher - if water is being used for both consumption and handling waste.

The CER’s published details of its assessed charges regime online which will are based on the number of adults in a household.

It says water will cost €176 for a household with one adult and an extra €102 for every extra adult living in the household, for both drinking water services and waste water services.

People with water meters installed will have consumption-based charges, but will have their bills capped at the assessed charges for six months after the meter is installed.

This means that during this time, if a customer has a meter, his or her charges will be no higher than the above charges and may be lower. 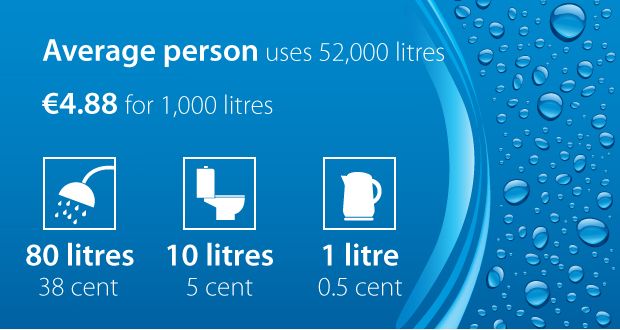 The metered rates have been set at €4.88 for 1,000 litres of water - or just under half of one cent per litre - for properties requiring both the waste and drinking water services.

A property that only requires one of the services - for example a house with a septic tank for dealing with waste water - will be charged at a rate of €2.44 per 1,000 litres, a CER spokesman said.

The average person uses about 52,000 litres of water and based on the figures published today, such usage would cost €250 a year.

A typical power shower uses about 80 litres of water a go so if someone has one every day it will cost them 38 cent or €139 a year.

It tales 10 litres of water to flush a toilet so that will cost five cent while anyone keen to boil a kettle will have to spend a penny - or at least one cent.

In a submission to the CER, Irish Water said it would need revenue of €2,263 million to cover the costs of providing water and wastewater services for the period from 1st October 2014 to the end of 2016.

The CER is proposing a cut of 8.2 per cent to ensure that only efficient costs are recovered from customers. This cut will result in an allowed revenue for Irish Water of €2,078 million.

When the total costs of providing water services are spread across all households this results in an average annual cost of €594 for a household with both supply and wastewater services but Government funding and free allowances for children will see that fall - at least until 2016.

The CER said if a leak is identified in a home is identified by Irish Water after a metre is installed, the customer’s charges will be capped until the leak is fixed.

Customers with specific medical conditions which require increased water consumption will be capped at the assessed charge if they have a meter installed.

Any water consumed above the assessed charge level will be free of charge.

Where water is unfit for human consumption, affected customers will receive a 50 per cent discount on the water supply charge for the duration of the restriction, and a 100 per cent water supply discount if the disruption is longer than 3 months.

A minimum water charge will apply to non-primary residences.